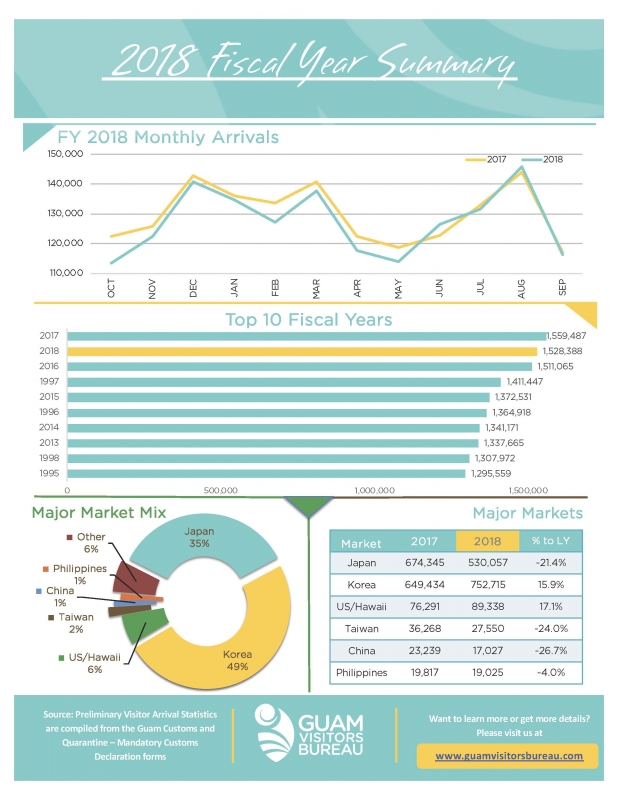 “It’s been a tumultuous year for our visitor industry but our tourism partners have pulled through to achieve the second-best fiscal year in the island’s tourism history. I applaud the hard work and persistence of the women and men in Guam’s number one industry, as well as the team at the Guam Visitors Bureau.”

Guam achieved its second-best fiscal year with 1.52 million people welcomed to our shores during FY 2018.

It was also the fourth top September with 116,515 visitors recorded in a month. The GVB Research Department noted weather events in the Pacific region, such as Typhoon Mangkhut, also affected September arrivals in the markets of Japan, Korea, Taiwan, Philippines, and China. However, the Valiant Shield exercise helped boost military arrivals for the month.

“Governor Calvo and I are proud of how the tourism industry has rebounded from factors outside our control this past fiscal year. We’re even more committed to sustaining growth in the visitor markets, promoting the Chamorro culture and ensuring jobs are intact for the tourism workforce of over 21,000 people. Kudos to GVB, Guam International Airport Authority, the Guam Economic Development Authority, and all our private sector partners for working relentlessly to support our top economic driver,” Lt. Governor Ray Tenorio stated.

The winter schedule for traveling to Guam will see an increase in airline seats in the Japan market. Air service initiatives from GVB and the Guam International Airport Authority have worked to support a growing demand from the Japanese market. Japan Airlines has extended its second daily flights between Narita and Guam through March 2019. Daily flights on Jeju Air from Osaka and Guam have been in operation since July. Additionally, United will reintroduce its Boeing 777-200 aircraft starting on October 28th on two of three daily flights from Tokyo. United will also be adding four more flights a week beginning December 2nd between Guam and Nagoya.

Through the end of Calendar Year 2018, Guam will have 471 charters from Japan, which more than doubled when compared to 2017. In 2019, Guam will welcome more than 600 charter flights, bringing in more than 119,000 additional seats to the island.

“I want to congratulate our tourism industry on this latest milestone. It wasn’t easy, but we achieved great momentum in our recovery efforts to continue growing and diversifying our source markets," said GVB President and CEO Nathan Denight.

"I also want to thank my GVB team for their hard work. In particular, we dedicate this preliminary September arrivals report to our director of tourism research, Ana Cid, who recently passed away. She was a joy to work with, dedicating over 25 years to GVB and modernizing our research department. May she rest in peace.”