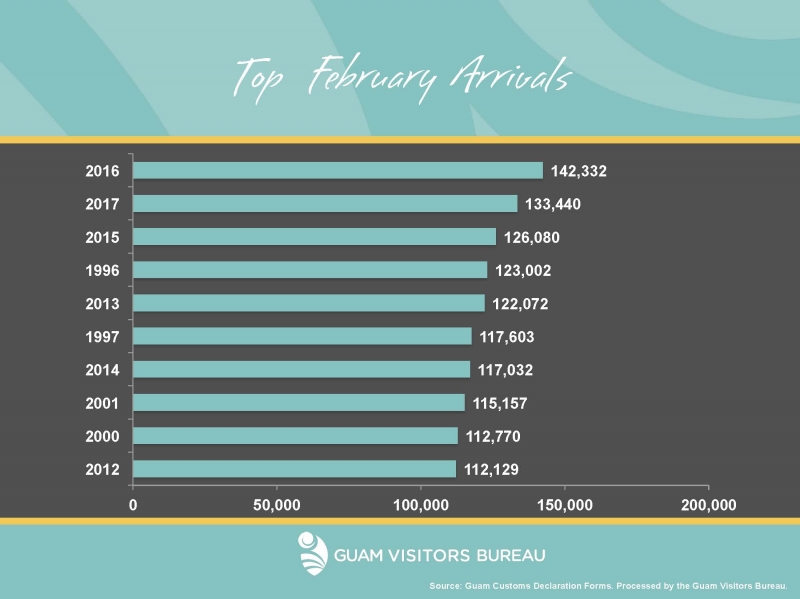 “Tourism has been the lifeblood of our economy for over 50 years. As we expand our markets, we will continue to break record after record when it comes to our visitor arrivals. We look forward to sharing our warm Håfa Adai spirit with many more visitors from around the world!"

Guam welcomed 133,440 visitors in February 2017, ranking as the second top February of all time.

“Word is getting out that our island and our culture offer a memorable experience — whether they are coming to celebrate a holiday, to get away for the weekend, get married, enjoy a few adventurous days of diving and shopping, or participate in one of our athletic events,”  Lt. Governor Ray Tenorio said. “These and more continue to bring visitors to Guam, helping to expand our tourism industry and grow our economy.”

Why Japan continues to decline

Japan visitor arrivals took a sharp dive of 24.3% when compared to the previous year, bringing in 54,356 visitors. The reason why Guam is seeing fewer Japanese tourists in February has to do with seating capacity. Airline carriers such as Delta and Korean Air have recently pulled out of gateways within Japan, like Osaka and Nagoya. There were 1,371,842 airline seats between Japan and Guam in 2012. Seating capacity is estimated at 1,114,545 in 2016. While GVB continues to work with existing airline partners and reach out to new ones, seating capacity will continue to be a top priority for the remainder of the year with Guam’s top market.

“GVB is anticipating a decrease of 9% in seats for Fiscal Year 2017. To address this in the short term, the Bureau created an Airline Charter Incentive Plan for travel agents and airlines to help bring in more Japanese visitors,” said GVB President and CEO Nathan Denight. “We are projecting to have over 200 charters for this year, which is more than double of what we had in 2016.”

Guam’s second largest market of Korea grew 23.1% in February, bringing in 51,181 visitors to Guam. Hong Kong arrivals also noted a large increase of 147.5% with the second full month of air service from HK Express. The Philippine arrivals also continued to rise with an increase of 49.8% with competitive prices from United, Philippine Air and Cebu Air.