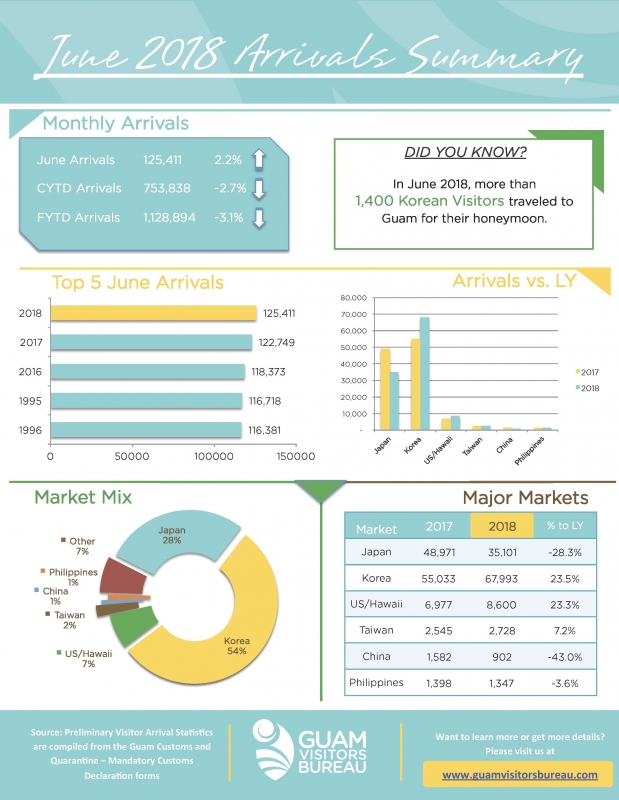 “Guam’s tourism industry is important to all of us. Our top economic driver supports 1 in every 3 jobs and other services that showcase our Chamorro culture and helps keep our island safe and beautiful.”

The various visitor markets also demonstrated growth and diversification for June 2018. Korea arrivals numbers increased 23.5% when compared to the previous year. Additionally, other markets that grew include the U.S. and Hawaii by 23.3%, Taiwan by 7.2%, Australia by 44.4%, Europe by 9.8% and the Russia Federation by 38.6%.

Events such as the 6th Annual Electric Island Festival and Guam Pride 2018 also helped attract more visitors to the island. There was also a boost in Armed Forces Sea arrivals due to Exercise Malabar, which brought India’s naval forces, the Japan Maritime Self-Defense Force and other U.S. military personnel to Guam.

“Si Yu’us Ma’åse’ to our hardworking women and men in tourism on setting a new record. We’re proud of you all for displaying our Håfa Adai spirit and sharing our hospitality to our local residents and visitors,” said Lt. Governor Ray Tenorio. “Let’s keep up the great work as we enter the second half of 2018.”

Japan struggles, but hope on the horizon

The island has had a -3.1% decline in total visitor arrivals in FY18, primarily due to the negative effects of the North Korea news and a loss of air seats from Japan include the exiting of Delta from Guam, Saipan, and Palau. The Japan market was the most negatively impacted with a 30% loss of seat capacity in June, resulting in a -23.9% decrease in arrivals. The Guam Visitors Bureau has continued recovery efforts including extensive joint promotions with traditional and online travel agents plus impactful air seat capacity initiatives with the Guam International Airport Authority.

These efforts are now paying off as several airlines announced additional flight service to Guam in the month of June. United is resuming its twice-daily Boeing 777 service between Guam and Japan beginning October 28, 2018 to March 30, 2019, providing an 80% increase in available seats from the Boeing 737. United Airlines is also restoring four weekly flights between Guam and Nagoya from December 2, 2018 through the end of March 2019. The additional four weekly flights will add 1,000 seats per week.

This is in addition to the 20 additional flights in August between Tokyo and Guam for the 2018 summer peak season.  United will also be operating 8 extra flights between Guam and Osaka during November and December to meet the increase in demand.

Japan Airlines also announced that based on growing demand for Guam, it has revised its flight frequency plans and will be extending its second daily flight service from Narita to Guam through March 30, 2019.  Through GVB and GIAA’s air service initiatives, the air carrier stated in December 2017 that it would offer a second daily service from Narita to Guam from March 25, 2018 to October 27, 2018.

Summer charters are also running from July to September, providing 33,277 more seats to the island. More than 350 charter flights are operational through the end of 2018. GVB and its partners continue to reach out to existing airlines to increase service and other potential air carriers to consider new routes to Guam.

“We’re pleased to see some progress made in the Japan market, but there is still much work to be done. Now that we have regained airline seats from Japan, we must work even harder to make sure those flights are full,” said GVB President and CEO Nathan Denight. “During this difficult budget season, we ask our lawmakers to continue to prioritize our number one industry with the resources and smart policies needed to be successful. In return, tourism can provide more jobs and opportunities for our people and a healthy economy that can provide more tax revenue for the Government.”