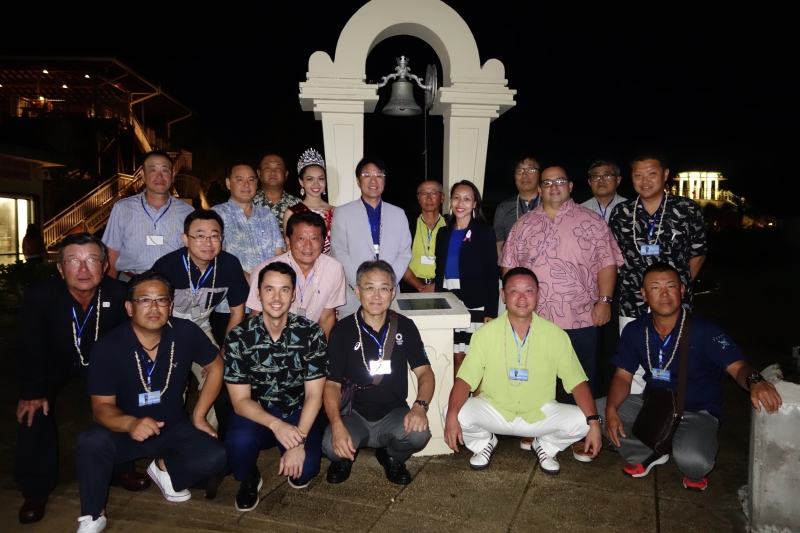 (Tumon, Guam) Delegations from Guam and Japan came together on October 26, 2018, to commemorate 30 years of a sister agreement that celebrates two iconic sites sharing similar tales of love.

Guam’s Puntan Dos Amantes (Two Lovers Point) and Japan’s Koibito Misaki (Lovers Point) have maintained nearly three decades of goodwill and friendship based on a sister point agreement that was signed by former Governor Joseph Ada and Toi Town Mayor Takashi Aoki on September 6, 1989. The Toi Tourist Association and the Guam Visitors Bureau (GVB) organized the agreement. Toi is a small town that is part of Izu City in the Shizuoka Prefecture of Japan. Since the sister city relationship was established, Toi Town also donated a duplicate of the same silver “Love Bell” that resides in Japan to Two Lovers Point in Guam. The bell symbolizes happy, eternal love to all couples that visit these attractions.

The silver bell was rung during the 30th-anniversary reception at the Two Lovers Point grounds and the Terraza at Dos Amantes restaurant. A Toi delegation consisting of experts from government, finance and tourism sectors was also present and was headed by Izu City Mayor Yutaka Kikuchi, while Senator Regine Biscoe Lee led the Guam delegation.

“While the stories of both Two Lovers Points differ, I think it’s wonderful to have two iconic sites from two different places linked together by love,” said Senator Lee. “What’s also successful about our sister point agreement is that it adds another dimension to Guam and Japan’s friendship. It shows how connected our people have become through the years and the hope that we will continue to maintain that for many years to come.”

“We’re happy to have teamed up with Two Lovers Point to co-host this special event and welcome back our friends from Toi and Izu City,” said GVB President and CEO Nathan Denight. “Tourism makes it possible to visit so many places in the world and the opportunity for us to share our values, traditions, and cultures. If there is any indicator that tourism works, it is this celebration of this sister point agreement that has lasted three decades.”

Guam also has another sister point agreement with the Lovers’ Point of Kashiwazaki City in the Niigata Prefecture in Japan, which was established in 2003 by former Governor Felix Camacho and Kashiwazaki Mayor Shingo Tsuchida.