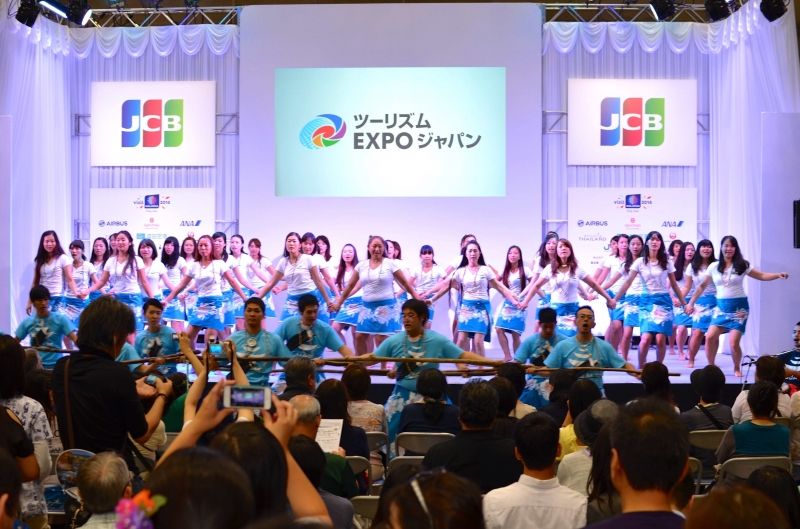 (Tokyo, Japan) Team Guam continues to make a great impression at the JATA Tourism EXPO Japan with a plethora of activities lined up for the final day of this 4-day event. However, the island’s 4,000 year old Chamorro culture separated the Guam booth from the rest of the 150 countries and regions that are part of Japan’s largest tourism expo.

Led by Master Frank Rabon, nearly 100 Japanese dancers from the Guam Chamorro Dance Academy (GCDA) performed to thousands of consumers on the Guam stage, as well as on JATA’s main stage. GCDA is a program that was started by the Guam Visitors Bureau in 2009 to teach interested Japanese people the art of traditional Chamorro dance. Since the program began, Rabon has taught over 1,500 students in over six cities in Japan, including Tokyo and Nagoya. The program has also expanded to the U.S. mainland this year.

“They’ve enjoyed it. Every time I come over here, there’s always an addition to the numbers that are coming in to learn. It amazes me because they really don't have to learn our culture. They have their own culture. They’re Japanese. But they really want to learn,” said Master Frank Rabon. “A lot of them travel to Guam after getting a little bit of the practices. They get the interest to travel to Guam and they stay a little longer. They take in not just the beaches and the sights and the hospitality of the island, but they also take in the culture, which is something that is unique to us.”

“We want to thank Japan for welcoming us and embracing the Håfa Adai spirit, especially through the Guam Chamorro Dance Academy,” said GVB Deputy General Manager Nate Denight. “Team Guam has worked hard these last few weeks to share our island’s story with the international community.  It’s definitely important for us to continue placing our Chamorro culture, I Kottura-ta, at the forefront of JATA because it has drawn millions of people for over 20 years to visit and learn more about Guam.”

The JATA Tourism EXPO Japan concluded today, but Team Guam’s efforts continue with the mission to make the island a better place to live, work and visit.