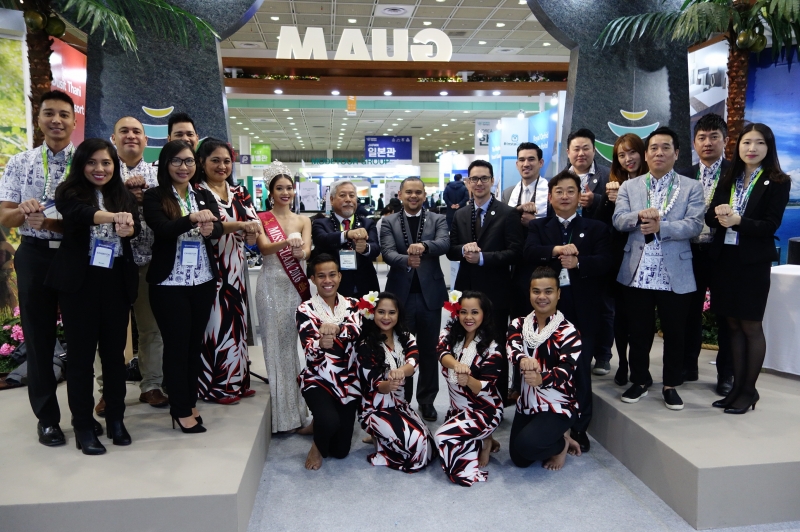 (Seoul, Korea) The Guam Visitors Bureau (GVB) and its tourism partners recently returned from promoting the island at the fourth annual Mode Tour Travel Mart held in COEX, Seoul from November 16 - 19, 2017.  The travel mart welcomed an estimated 80,000 visitors to the show during the four-day event.

Led by Senator Dennis Rodriguez, Jr., Team Guam had the largest booth among 300 exhibitors and more than 60 countries that were represented.

"I thank GVB and the Korea Marketing Committee for really building the Korea market on Guam,” said Senator Rodriguez, Jr. “This is my first time in Korea and my first time at this travel show. I saw how important it is to have a presence here. We heard many Korean people saying they've never been to Guam and only saw it through pictures. We encouraged them to come to Guam and truly experience and feel the Håfa Adai spirit of our people. We have to ensure that we stay committed and really take care of this market.”

The Guam booth offered a variety of attractions including performances by local music legends Jesse Bais and Ruby Santos, Guam cultural dancers, magic shows by Encore!, photo opportunities with Miss Guam Audre Dela Cruz and Mr. Guam Jon Kanemoto, and an interactive photo booth. Visitors were also able to immerse themselves with a 360 degree virtual reality experience of Guam. Live posts on GVB’s social media were also shared throughout the duration of the travel show.

In addition, GVB shared its newly launched Visit Guam 2018 campaign, “InstaGuam.” The campaign focuses on Guam as an instant vacation for different countries in Asia and to encourage the use of Social Networking Sites (SNS) to promote the island.

Visitors were also encouraged to download the newly updated Shop Guam e-Festival app to take advantage of more than 300 offers when traveling to Guam.

"We're always happy to be in Korea. I think we did a good job in putting all our members in our delegation under one roof at our Guam booth to promote our island to thousands of people that attended the travel mart,” said GVB Board Chairman Milton Morinaga.

"This year is the first year in Guam's history that Korean arrivals will surpass Japanese arrivals. It's more important than ever that we keep our position in Korea and continue to push the market forward,” added GVB Board Director & Korea Marketing Committee Chairman Bart Jackson. “This travel show is so important to our success that we have to be here. I'm really proud to have a Guam Pavilion this year and all of the Guam players working together as a team. I think we're really putting on a great face on Guam for the Korean people and a great foot forward for our sales and marketing efforts."

In addition to the travel show, GVB also met with Korean Air and Jin Air to provide an update on Guam’s promotions and travel trends within the island’s source markets, and strengthen its commitment to growing the Korean market.

"Korea's so cold right now so the timing is perfect to promote travel during the winter time and plan their next getaway,” said GVB President and CEO Nathan Denight. “This travel mart provides an opportune time to promote Guam’s offerings, upcoming events, and highlight our island as a unique destination.”