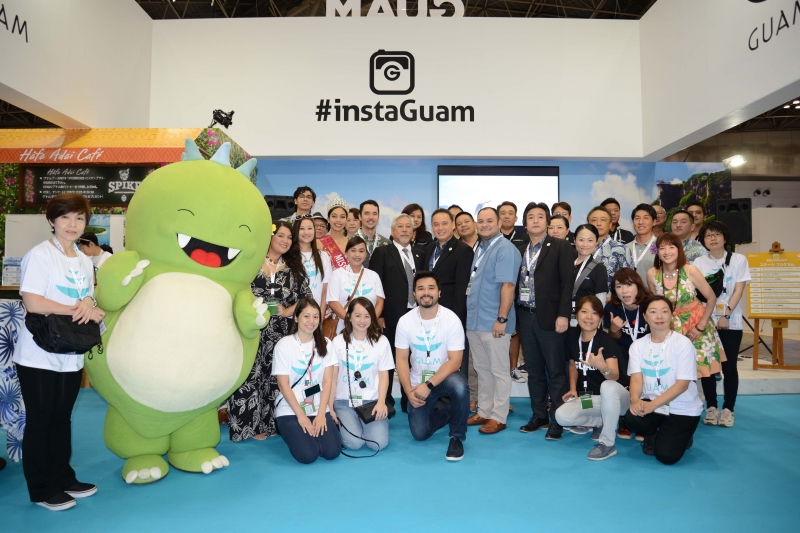 (Tokyo, Japan) Guam showed a strong presence at one of the world’s largest travel trade exhibitions – Tourism EXPO Japan. Close to 1,500 companies and organizations represented 130 countries and 47 prefectures at the expo from September 20-23, 2018 at the Tokyo Big Sight. Organizers estimated that over 200,000 visitors were in attendance.

The Guam booth played an important role in this year’s theme of “Let’s create new forms of tourism” by featuring the #instaGuam campaign and members of the Guam Visitors Bureau (GVB). Japan Guam Travel Association (JGTA), Skydive Guam and Pleasure Island were among the featured businesses. Exhibitors distributed thousands of promotional material during consumer days and participated in sales meetings with travel trade partners. The Guam booth also rewarded attendees with locally roasted Spike Coffee and Latte Stone cookies if they visited all Guam exhibitors.

“GVB continues to hone in on opportunities that will help us rebuild the Japan market, which is why shows such as Tourism Expo Japan are so important for our business,” said GVB President and CEO Nathan Denight.

The Bureau met with Japan Airlines, United, China Airlines, T'way, JTB and the Japan Association of Travel Agents (JATA) to discuss current market conditions, as well as new sales and promotional opportunities for Guam in the near future.

The musical stylings of Patrick Palomo and Tradewinds, as well as Miss International Guam 2017 Annania Nauta and Gumamon attracted thousands of visitors to the Guam booth during the four-day event.

Pa’a Taotao Tano’ and the Guam Chamorro Dance Academy (GCDA) captured the attention of thousands more as they performed on the main stage of Tourism Expo Japan and the Guam booth. Over 70 Japanese dancers, about 17 of them children, wowed the audience as they wore traditional costumes and performed ancient Chamorro and Spanish era dances and chants.