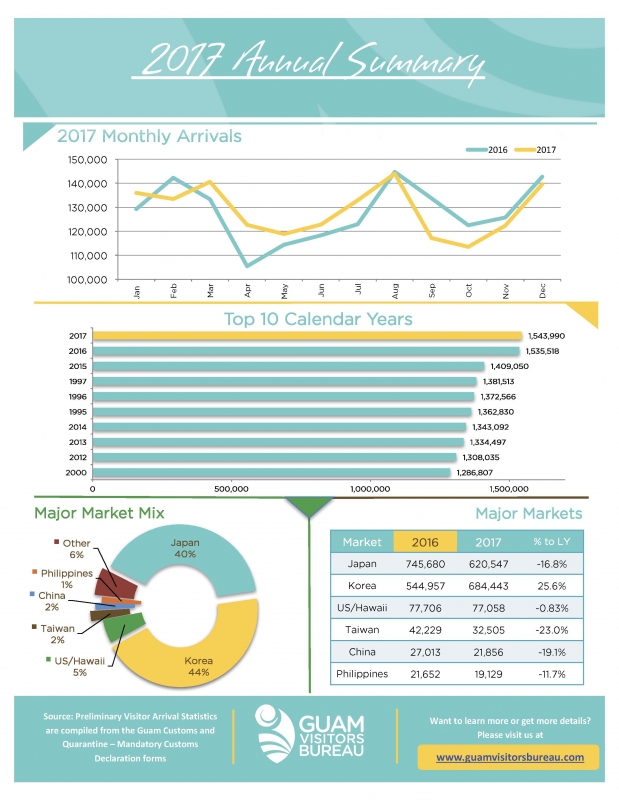 “Congratulations are in order for the Guam Visitors Bureau and the island’s tourism industry. Despite a challenging year of global events and changes in different visitor markets, Guam achieved its best calendar year yet. There’s much work ahead to stabilize our number one economic contributor, but I commend the men and women of tourism for working hard to welcome our visitors and showcase our Chamorro culture to the world.”

“Congratulations to GVB and the thousands working in the tourism industry on a new record year,” said Lt. Governor Ray Tenorio. “We know it is not an easy task, but all of us working together to show that we are Guam and this is our Håfa Adai spirit and culture is what will keep our guests coming back for more. Governor Calvo and I will continue standing side-by-side with tourism’s finest to keep our top industry thriving for many more years to come. Biba Guam!”

The breakout visitor market of calendar year 2017 was Korea, with an all-time high of 684,443 visitors, up +26% versus last year. The increases in the Korea market helped offset the declines in other markets to include Japan, Taiwan, and China.

“Completing the year with 1.54 million visitors is a great milestone for our visitor industry,” said GVB President and CEO Nathan Denight. “The growth and diversification of all of Guam’s visitor markets collectively helped the island achieve that number, as well as the hard work and dedication of our tourism industry.”

The impact of tourism

Since 2010, the dynamic growth and diversification of tourism have positively impacted the island’s economy and our community’s quality of life. According to the latest Tourism Satellite Account report, tourism has added 7,391 more jobs to the local workforce and $110 million dollars more in government revenue. Visitor arrivals have also grown 28.9% between 2010-2017, which speaks to the success of the tourism industry accommodating an additional 350,000 guests to the island’s shores.

“The local community is our biggest stakeholder in all of this and we are committed to having them benefit from tourism and showing them how tourism works for them. Si Yu’os Ma’åse’ to Governor Calvo, Lt. Governor Tenorio, the Guam legislature and our industry partners for their support of the tourism industry,” added Denight.

To help continue the momentum of promoting the island, GVB also recently launched its new Visit Guam 2018 campaign with its theme of “#Instaguam” in all of its visitor markets. The theme pairs two ideas: showcasing Guam as an instant destination from major Asian cities and the use of Social Networking Sites (SNS) to promote unique experiences of Guam by island residents and visitors.

GVB and our industry partners remain committed to the Japan market even as Guam faces several challenges including the weak Yen, reductions in airline seats, stiff competition from other destinations and the negative effects of the North Korea news. The Bureau is actively engaged with both travel agent and airline partners to support their efforts to promote travel to Guam. GVB also continues to work with GIAA to attract more airline service from Japan, such as the second daily flight from Narita that Japan Airlines announced it would add in March. Upcoming special events such as the United Airlines Guam Marathon and AKB48 Guam fan tour will take place in April and help boost Japan arrivals.