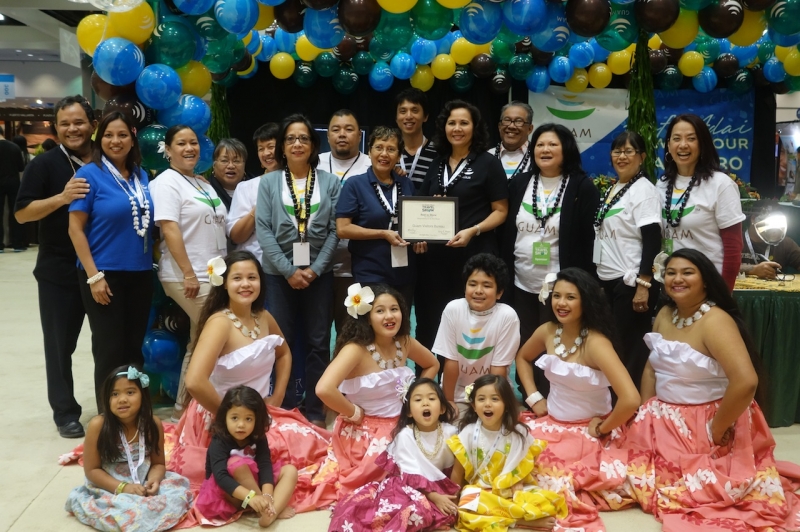 (Tumon, Guam) Over 20 Guamanian volunteers from the U.S. West Coast joined the Guam Visitors Bureau (GVB) to showcase the rich and vibrant history of the Chamorro culture at the 16th annual L.A. Times Travel Show from January 17 - 19, 2014. GVB has participated in the Southern California event for over 6 years.

“With more than 22,700 travel industry experts and consumers that attended the three-day event at the L.A. Convention Center, the travel show was a perfect outlet for Guam to expand its reach in other visitor markets,” said GVB General Manager Karl Pangelinan. “The GVB booth did great in featuring Chamorro cultural demonstrations, along with two destination seminars on island attractions, military history, beaches, shopping and nightlife.”

Those that attended the travel show were also treated to the “Hafa Adai Cultural Dance Show,” which was performed by the Kutturan Chamorro Foundation from Long Beach, California. In addition, visitors learned of the island’s upcoming 70th Liberation Day celebration and that Guam will be hosting 27 countries and territories for the 12th Festival of the Pacific Arts (FESTPAC) in 2016.

“Guam’s unique culture continues to shine, especially through all the stateside Chamorros and former island residents that visited the show,” said GVB Marketing Manager Pilar Laguaña. “Our volunteers came from San Francisco, Las Vegas and San Diego and attracted hundreds to our booth. We are thankful for their support in sharing the very best of what our island has to offer. As a result of their hard work, we won the Best in Show award at the travel show.”

Additionally, Laguaña was joined by GVB Marketing Officer II Gina Kono to represent the bureau at the Sons & Daughters of Guam Club, Inc. Liberation Kickoff Event in San Diego. The organization started its fundraising efforts that will tie into Guam’s annual Liberation Day celebration this summer.

GVB also continued its “Show Us Your Chamorro” social media campaign with the goal of encouraging stateside Guamanians to connect through social media to share their special stories and memories about Guam.