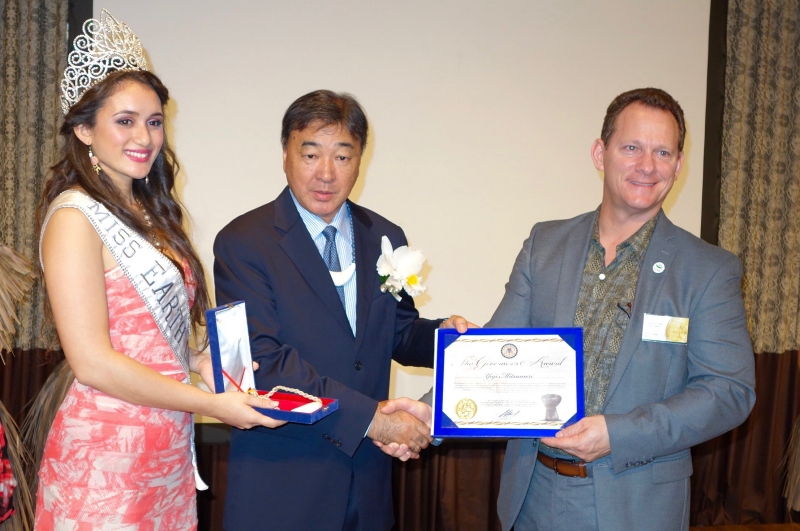 (Tumon, Guam) The Guam Visitors Bureau (GVB) has announced that after nearly 24 years of service, Japan Manager Yuji Mitsumori will retire from GVB tomorrow, September 30, 2016. Mitsumori contributed to Guam’s welcoming of over 1 million Japanese visitors in 1996, 1997 and 2000, and created an over 20-year partnership between the people of Guam, the Japanese Government, U.S. Government and Japanese Travel Agents.

“The Guam Visitors Bureau commends Mr. Mitsumori for his valuable contributions to Guam’s visitor industry and recognizes his commitment to develop, showcase and help make Guam the best place to live, work and visit,” said GVB Board Chairman Mark Baldyga.

The Bureau hosted a farewell reception earlier this week to honor Mitsumori where he was presented with a resolution by the GVB Board of Directors, an honorary resident’s award from all 19 mayors of the Mayors Council of Guam and the prestigious Governor’s award.

“On behalf of Governor Calvo, we recognize Yuji Mitsumori for dedicating 23 years of service to the people of Guam,” said Lt. Governor Ray Tenorio. “For more than two decades, Mr. Mitsumori has shared our island’s beauty, rich culture and warm Håfa Adai spirit with the island’s visitors, working tirelessly to promote Guam’s tourism industry as a hard working member of the Guam Visitors Bureau. All of the guidance you have shared, Yuji, with your fellow colleagues is an invaluable resource and is much appreciated.”

“I will always appreciate how he took me under his wing and taught me so much about the tourism industry and Japan. And he has done this for so many people,” said GVB President and CEO Nathan Denight. “Even though I’m just a bit younger than him, he always treated me with respect and I will always be grateful to him. To Yuji-san, I say Un Sen Dangkulo Na Si Yu’os Ma’ase for the over two decades of service to the Bureau and to the people of Guam. Biba Yuji!”

Mitsumori joined GVB on February 17, 1993 as a sales manager. He was promoted to Manager of GVB’s branch office in Japan on January 5, 2005. With his vast experience in the tourism industry, Mitsumori was instrumental in the development of several marketing and sales campaigns to promote Guam such as “True Guam”, “Smart Choice”, “Romance Guam” and “Guam Live Presentation.”

The Bureau will announce Mitsumori’s successor in the coming weeks.