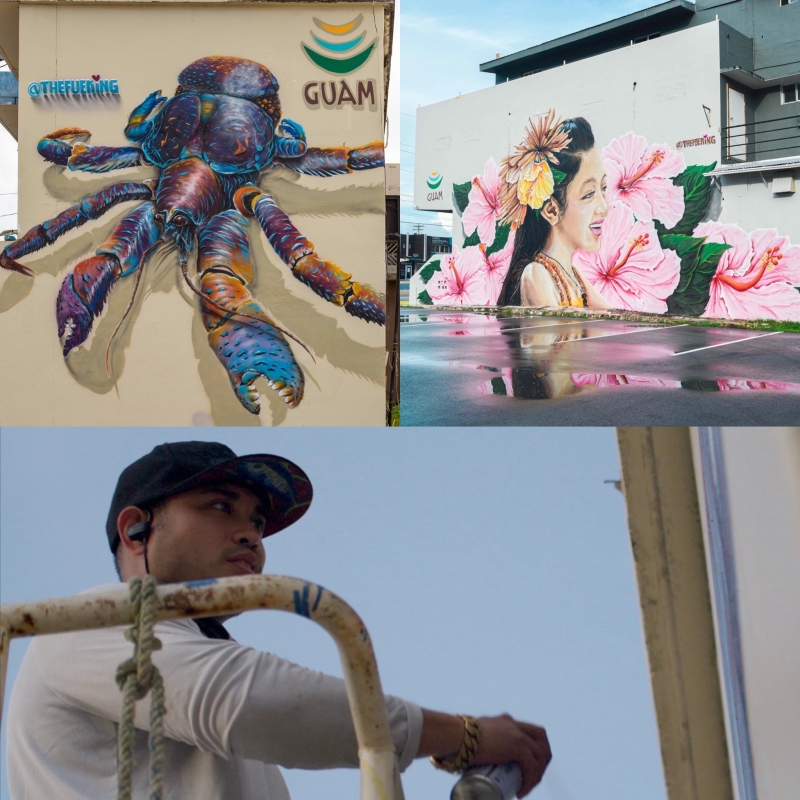 (Tumon, Guam) The Guam Visitors Bureau (GVB) is pleased to announce the non-profit membership corporation is working with local artist Lee Hiura San Nicolas to produce a series of murals around the island.

GVB has been a long time supporter of the arts on island and sponsored numerous events to include Pow! Wow! Guam, Guam Art eXhibit (GAX), and Guam Spraycation. The Bureau has also encouraged the growth of art spots and linking businesses with local talent.

“GVB has been working with other local and international artists for many years to beautify our island. We’re proud to continue that effort by collaborating with Lee,” said GVB President and CEO Pilar Laguaña. “This project is all about creating art with purpose. We wanted to create murals that told a Guam story and will become new attractions for our visitors and residents to see. There are five prime spots that will have large scale murals in the coming weeks for everyone to enjoy.”

Two of the five murals have already been completed. San Nicolas has finished a mural of a large coconut crab or ayuyu in the village of Anigua close to the Federal District Court. The second mural that was done is of a Chamorrita girl, Cameron San Agustin, and large hibiscus flowers next to the old Blockbuster/ Oasis Empowerment Center in the village of Tamuning. The next mural project will be at Paseo de Susana with the last two murals to be finalized.

“As an artist, I work hard to create paintings that visually speak both to me and to my audience about the beauty and culture of our island,” said San Nicolas. “Art is a movement and I hope to inspire the younger generation of artists to show their love of Guam and pair it with their love for art. Si Yu’os Ma’åse’ GVB for supporting the local art scene!”

San Nicolas has a “street island style” that aims to depict original culture fused with contemporary art flavor. He began his early career as a graffiti artist and has worked toward professional aspects of art in creative forms. His work is featured in galleries and throughout the local community. San Nicolas is a graduate of the University of Guam and majored in Liberal Arts.