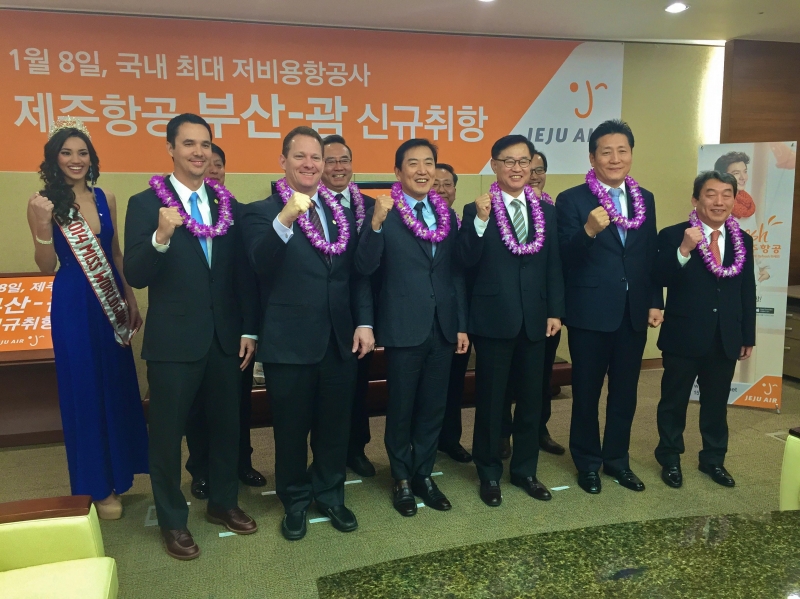 “This is great news for Guam and we applaud the efforts of Jeju Air in helping us to grow and diversify our Korea market, which translates into more jobs and opportunities for our island people,” said Lt. Governor Ray Tenorio. “Our administration and GVB continue to welcome all visitors to Guam, especially as we move forward with the Tourism 2020 goal of bringing in two million visitors.”

“Jeju Air’s confidence in Guam as a premier destination is definitely going to help us achieve even greater visitor arrival numbers going forward,” said GVB General Manager Karl Pangelinan. “This past year alone, we received nearly 310,000 Korean visitors, which exceeded our initial 2014 goals. GVB has been working closely with the Governor’s Office and Guam International Airport Authority to encourage Jeju Air to pursue more routes to Guam. This inaugural flight is a clear demonstration of the airline’s commitment to grow our Korean tourism market and we just want to thank them for their support.”

The new seating capacity with Jeju Air’s 737-800 aircraft has the potential to bring over 18,000 additional travelers out of Busan and will help GVB reach its 2015 goal to bring in about 375,000 Korean visitors to Guam.

Jeju Air is a Korean Low Cost Carrier (LCC), affiliated with the Aekyung Group. The airline also operates daily flights to Guam out of Seoul, which began in 2012.