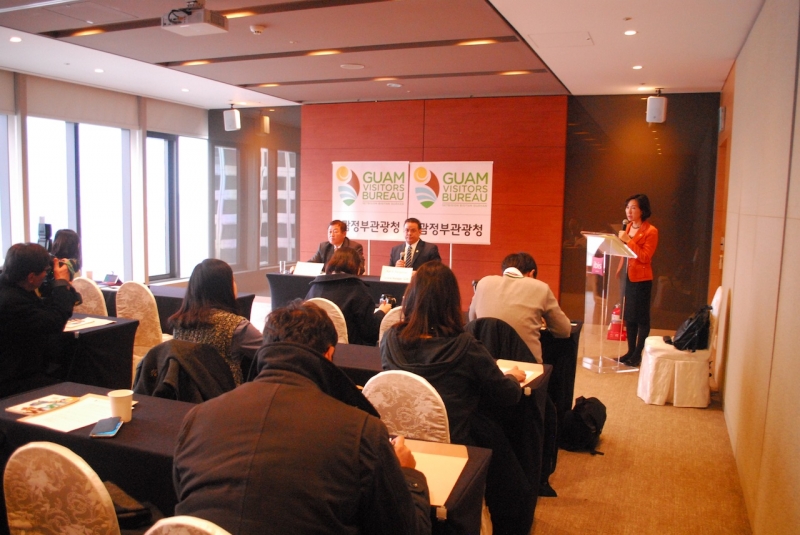 “GVB continues to seek a diversified tourism source base to Guam,” said GVB General Manager Karl Pangelinan. “While Japan is the primary visitor source, Korea continues to perform as Guam’s second largest market. With up to 6 daily direct flights available from Korea, we wanted to say ‘Si Yu’os Ma’ase’ to Korean airlines and travel agents. We look forward to another banner year from Korea in 2014.”

Pangelinan was joined by GVB Korea Marketing and Finance Committee Chairman N. Oscar Miyashita and Marketing Officer Felix Reyes. The team discussed looking at Busan as an additional gateway to Guam. They also talked about increasing the Meetings, Incentive, Convention and Exhibition (MICE) market to bring a higher yield of customers to the island. Currently, the MICE market accounts for 7% of overall Korean visitor arrivals.

Some of the representatives they met with were from Korean Air, Jeju Air, Jin Air, the Korea-Guam Tourism Council, the airline-travel agent President’s Club, the Korea-Guam Marketing Committee, Hana Tour, Mode Tour, Tour 2000, Korea Association of Travel Agents, and other organizations. The team also held a press conference to highlight the island with close to 20 international media in attendance.