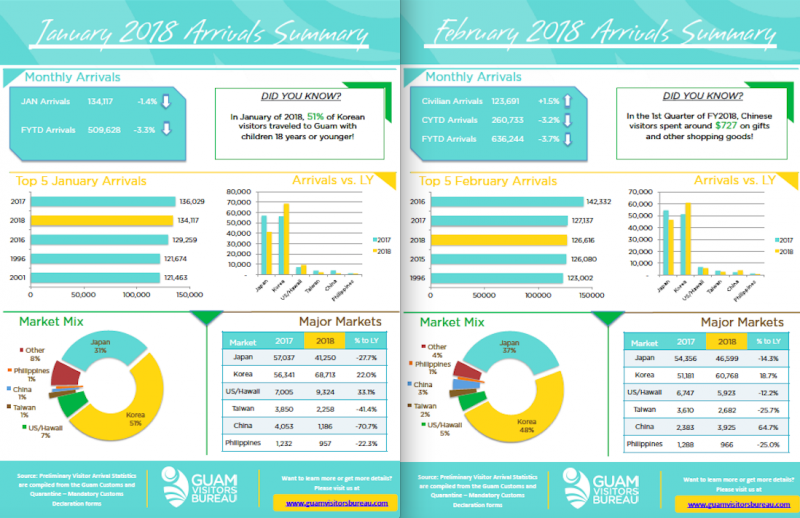 “As the main pillar of our island’s economy, the future of Guam’s tourism industry is looking very good. While there’s still work to continue stabilizing markets like Japan, arrival numbers from February show positive news we are moving in the right direction. While Guam works to get through the temporary fiscal challenges brought on by federal tax cuts, the fundamentals of our economy are strong and point to a bright economic future in the immediate years ahead.”

“Last year’s January numbers received a boost from the Chinese Lunar New Year and to see this year’s numbers come close to that is definitely something to highlight,” said Lt. Governor Ray Tenorio. Civilian arrivals for the month of February increased by 1.5%, with total February arrivals amounting to the third best February of all time. Total February 2018 arrivals were down 5.1% due to a decrease in military arrivals and civilian sea arrivals. “Guam has so much to offer with its unique attractions, events, and activities. We’re proud to share that experience with our visitors and our people on a daily basis. The hard work of the over 21,000 men and women that are in the tourism industry does not go unnoticed,” Lt. Governor Ray Tenorio said. “We appreciate all of you for showcasing our island’s Håfa Adai spirit and Chamorro culture on a daily basis.”

In January, Korea arrivals grew by 22%, with 68,713 visitors that came to Guam. Other markets that recorded an increase in arrivals include the U.S. mainland by 60.6% and Russia by 55.8%. Japan visitor arrivals declined by 27.7%, primarily due to Delta Airlines ending service to Guam and a reduction of flights to Guam on United Airlines.

Meanwhile, arrivals from Korea continue to soar with an 18.7% increase when compared to February 2017. Other markets that noted an increase in arrivals include the U.S mainland by 7.1%, the Republic of Palau by 31.7% and the Russia Federation by 7.3%. Japan arrivals showed a decrease of 14.3%, but the launch of Japan Airlines second daily flight to Guam in late March will help bring more available seats to the island.

Chinese Lunar New Year was celebrated during this time period and helped contribute to the increase in arrivals for Guam’s China market with a 64.7% boost for the month.

“GVB celebrates its 55th anniversary this year and we thank our partners in the public and private sectors for their support of the growth and diversification of our top industry. We have much to look forward to in the immediate future with the launch of the second daily flight to Guam from Japan Airlines at the end of March and all the signature events ahead,” said GVB President and CEO Nathan Denight. “Guam is still on the road to recovery and we’re working very hard to keep up with our competitors in the region. We must continue to push to increase airline seats and hotel room inventory, reinvest into our aging infrastructure and improve the Guam product.”