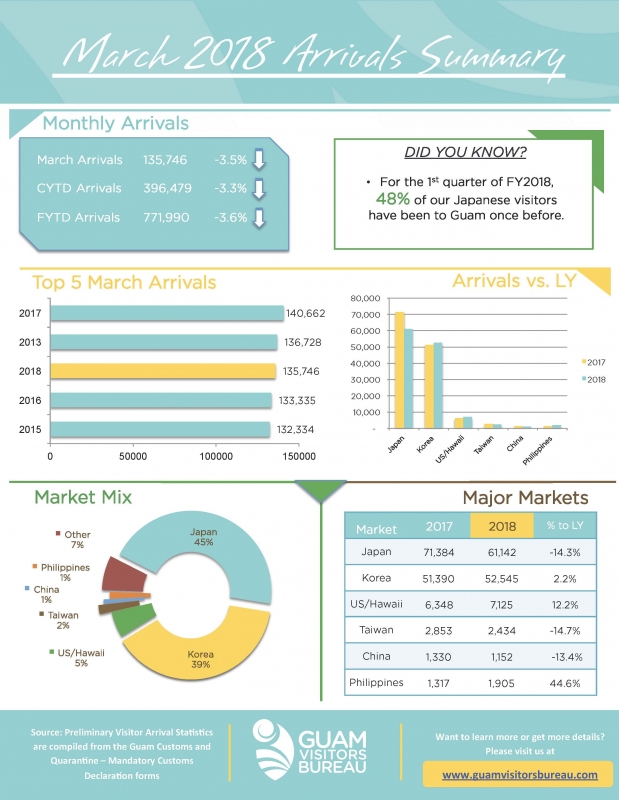 “Much continues to change in our tourism industry. The one constant is our effort to promote the island for our visitors and our community.  I want to thank the folks at Guam Visitors Bureau and their tourism partners for adapting to those changes and addressing our need for more airline seats and to improve and expand our tourism market."

The total numbers are an indication that the Guam Visitors Bureau’s multi-faceted efforts to help maintain and improve local sites, promote our island to visitor markets, and work to increase airline seats are helping to sustain tourism activity.

Total seat capacity for Japan was at 68,585 seats for the month. Out of that number, 61,142 seats were filled. This means that for the month of March, all flights from Japan to Guam were nearly 90% of the total air lift capacity. The Japan market managed to edge out Korea arrivals to become the top market for March, though it did decrease by 14.3% compared with the previous year.

Meanwhile, Korea’s visitor arrival showed moderate growth with a 2.2% increase over March 2017. Other markets that also noted growth and diversification include U.S./ Hawaii by 12.2%, the Philippines by 44.6% and Europe by 16.9%.

“Tourism continues to grow and diversify through the sheer hard work of our more than 21,000 men and women who share our Håfa Adai spirit with our visitors,” said Lt. Governor Ray Tenorio. “Let’s keep the support going and celebrate the milestones with our people.”

Based on the current trend of arrivals to Guam, GVB’s Research Department updated its overall annual projections for Fiscal Year 2018.  With an increase in charters and additional airline frequencies, Guam is projected to welcome about 1.5 million visitors at the end of FY18. This is a 3.7% decrease compared to Fiscal Year 2017.

“Our team has been working diligently to secure charter flights for our Japan market and encourage existing air carriers to increase their flight service and potential ones to consider flying directly to Guam,” said GVB President and CEO Nathan Denight. “Our efforts have led GVB to update our projections as current trends see us ending FY2018 with a 3.7% decrease versus the previously reported 7.8% decrease. Guam’s recovery has moved relatively quick and I just want to thank our industry partners for working together with us. Now we just need to increase our airline seats and continue to improve the destination that is Guam.”

GVB has multiple air service development initiatives that are helping with Guam’s recovery of air seat capacity. Most notably for the Japan market, a charter plan has spurred additional flights for the summer months. More than 350 charters are planned to operate throughout the remaining part of the year.

Additionally, GVB is in constant communication with existing carriers about increasing more service and in discussion with full service carriers and Low Cost Carriers (LCCs) to open up flights to Guam. Some carriers have shown a greater interest in operating in Guam due to these discussions.

The Bureau has also been working closely with the Guam International Airport Authority (GIAA) to offer its regular air service support program and the airport’s incentive plan for discounted fees. The most recent result of the success of the air service development initiatives is Japan Airlines committing to a second daily flight from Narita to Guam, which will bring an additional 40,000 seats to Guam through the end of October. United also recently announced it will add 20 additional flights between Tokyo and Nagoya and Guam to run in August.

GVB is aggressively advertising, creating online content and promoting its Visit Guam 2018 campaign, #instaGuam, in all of its markets. There is also a focused effort in partnering with the island’s travel trade, travel agents, and group initiatives.

Meanwhile, the quality of the Guam product is in a constant state of improvement. GVB recently held a ceremony to mark the Phase II completion of the Tumon Bay Streetlight Rehabilitation Project, with all 325 streetlights now working in the tourism capital with new energy efficient LED lighting. A ceremony for the completion of GVB’s state of the art bus shelters is expected in the coming weeks.