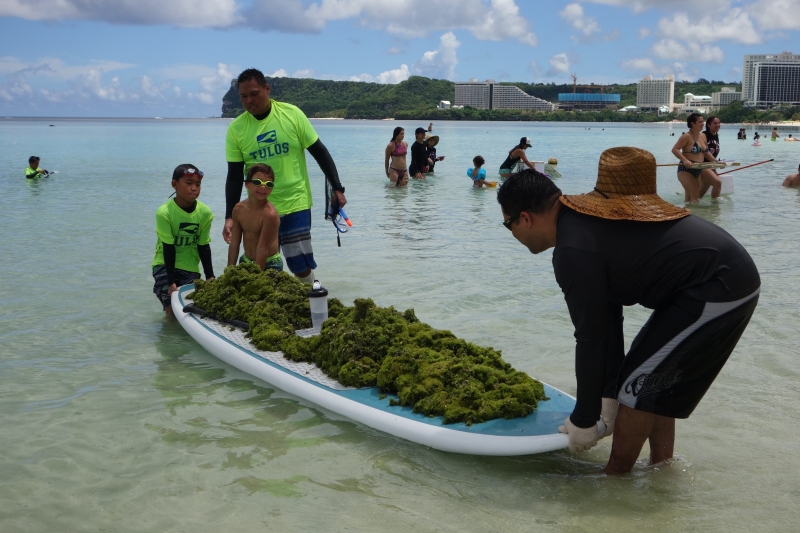 (Tumon, Guam) Over 400 people volunteered their time over the weekend to help with the removal of an invasive species of algae that has made its way into Tumon Bay.

This is the second cleanup organized by the Guam Visitors Bureau (GVB) and Guam Department of Agriculture to bring the macroalgae known as Chaetomorpha (pronounced key-toe-morph-ah) under control. The algal bloom was first noticed along the Tumon shoreline in June and grew rapidly over the past two months with weather systems increasing the spread of the algae within 100 feet of the reef.

“Si yu’os ma’åse’ to everyone that came on Saturday for their help,” said GVB President and CEO Nathan Denight. “We had an excellent turnout with volunteers combing the shoreline and paddlers going as far as 150 feet away from shore to remove the algae. Their efforts really made a difference in keeping Tumon beautiful for our residents and visitors to enjoy.”

The first cleanup was held on July 15th between Ypao Beach and Matapang Beach where the bulk of the algae growth has occurred. Nearly 60 volunteers collected an estimated 500 pounds of algae, which was taken to an inland site by Dept. of Agriculture. The August 25th cleanup produced nearly 2,000 pounds of algae that was removed by over 400 volunteers. Local farmers also expressed interest in using the algae to enrich their soil as a biofertilizer.

“Ypao wasn’t as bad this time around because the recent storms pushed the algae further away from shore. However, the area from the pillbox to the Matapang side was heavier with the algae,” said Fisheries Biologist Brent Tibbatts. “We’ll continue to monitor the algae levels. Chaetomorpha is not natural to our ecosystem like the normal lumot (Enteromorpha) or Boodlea that already grow in Tumon Bay.”

GVB is looking to control the invasive algae in Tumon Bay with long-term monitoring and removal being planned. Meanwhile, Department of Agriculture is already moving forward with another cleanup to be scheduled at Cocos Island in Merizo in the coming weeks.

“Look out for the Cocos Island cleanup in the near future. We’re working with NOAA and GVB on the project. The algae growth is much worse there so we’ll be dedicating more resources to get it under control,” noted Tibbatts.