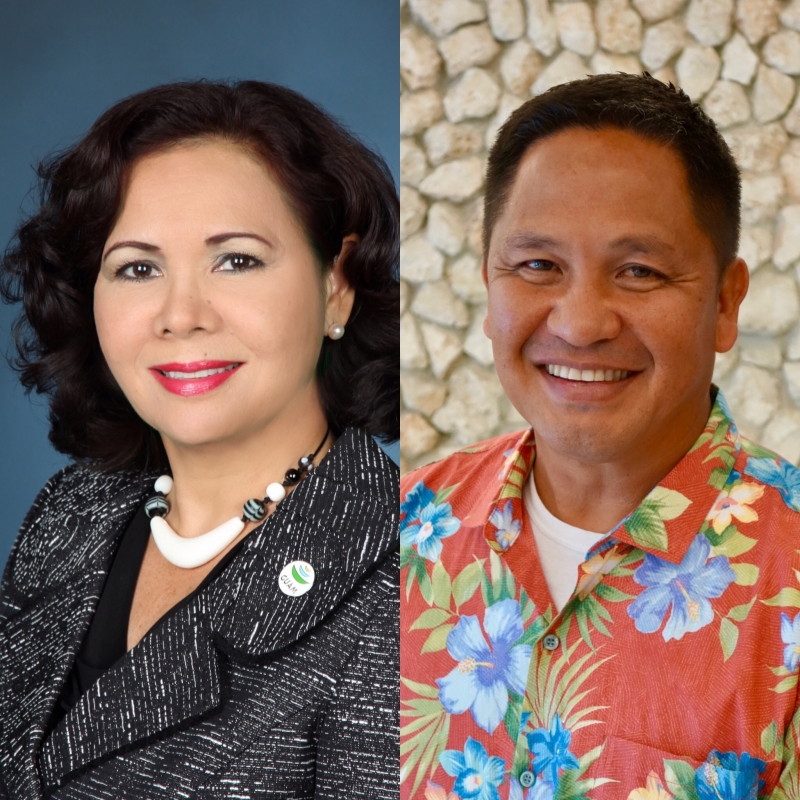 A motion was made to name Laguaña as the successor to GVB President Nathan Denight, whose last day at the Bureau will be Friday, February 15, 2019. The motion passed unanimously with all board members present.

“Pilar is no stranger to GVB nor the tourism industry. With over 40 years of experience in Guam’s top industry, our board will lean on her expertise and commitment to taking tourism into its next era,” said Morinaga.

“I also want to thank Nathan Denight for his nearly 8 years of outstanding service to the tourism industry and the people of Guam. Nathan was instrumental in modernizing GVB and increasing the international presence of the Guam brand online and in-market, while attracting world-class acts to our island. He helped to steer our industry with the goals of the Tourism 2020 strategic plan that he co-authored.”

“I send my congratulations and best wishes to Pilar. I’ve worked with her throughout my time at GVB and offer my full support,“ he said. “It has been a pleasure working alongside my Vice President Tony Muña Jr., including all our industry partners and sponsors. I thank Governor Eddie Calvo, Lt. Governor Ray Tenorio, Governor Lou Leon Guerrero, Lt. Governor Josh Tenorio, the Guam Legislature and our board for allowing me to serve our island community. I especially thank my GVB familia for their hard work and making my experience in this industry so memorable. Un sen dangkulo na si yu’os ma’åse’.”

As a seasoned tourism-marketing executive, Laguaña began her career at GVB in 1977. Over the years, she has advanced through many roles at the Bureau, including serving as GVB’s Deputy General Manager in 1982. She has been overseeing GVB’s marketing department as the Director of Global Marketing since 1987.

Ms. Laguaña is an active member of Pacific Asia Travel Association (PATA), a global organization that awarded her the prestigious PATA Award of Merit in 2009. She also holds the longest tenure in the PATA Micronesia Chapter, serving as its immediate past chairwoman.

Laguaña acquired her high school and college education in Hawaii and also pursued her professional Japanese language and cultural training from the Tokyo School of Japanese Language - Institute for Research in Linguistic Culture.

"I am very honored to serve as the Bureau’s next President and CEO. It’s been a long journey and a very rewarding one to come to this point in my career. I will carry the honor and great gratitude that the board has in me. I will continue to do my very best for the people of Guam. I look forward to working even closer with our business community. This is a membership organization that I believe will bridge our local community closer for the benefit of the people of Guam and our visitor economy,” Laguaña said.

“I also want to thank Nathan and Tony for their leadership and I want to recognize the professional staff that stands behind this organization. I am excited to be part of the movement for change and remain committed to working with our Maga’håga, Governor Leon Guerrero, as well as our Sigundo Maga’låhi, Lt. Governor Tenorio, the Guam Legislature, all our board members and the community at large to empower our island.”

The GVB Board of Directors also voted to confirm Robert “Bobby” Alvarez as the new GVB Vice President. Laguaña announced her appointment of Alvarez to the board, which unanimously confirmed him.

Alvarez began his career in tourism in 1984 as a windsurfing instructor at the Pacific Islands Club Guam. During the tourism boom in the late 1980s and early 1990s, he assisted in the grand openings for Pacific Star Hotel, Hyatt Regency Guam, Mangilao Golf Resort, Westin Resort, Leo Palace Golf Resort, and Sandcastle. While working at various hotels, restaurants, and entertainment venues, he quickly learned to converse in basic Japanese. He was able to work his way up to management and also taught basic Japanese language classes to staff at hotels he worked at. He has since taken on roles as the Executive Assistant for former Lieutenant Governor Ray Tenorio and Director of Business Development for Galaide Professional Services Incorporated (GPSI) Guam.

“Thank you for your vote of confidence. I’m going to work closely with Pilar. We’re going to further the agenda and do what is best for the Bureau in itself. We have a great team of hard-working tourism professionals and I’m excited to work with all of them,” Alvarez said. “I also want to thank Governor Leon Guerrero and Lt. Governor Tenorio for their confidence in Pilar and me to lead Guam’s top industry.”