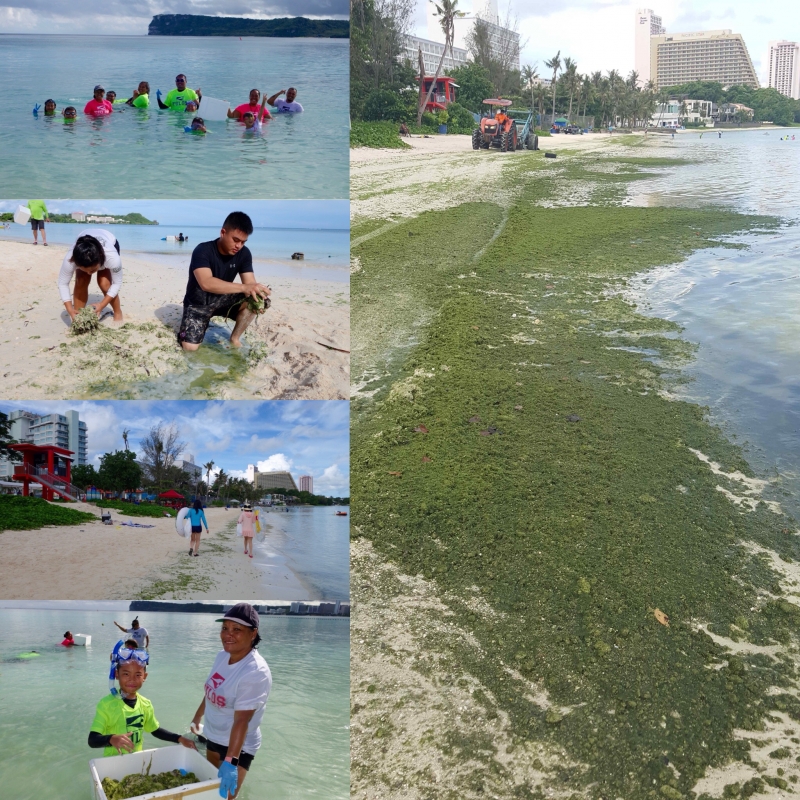 Next cleanup scheduled for August 25

(Tumon, Guam) The Guam Visitors Bureau (GVB) and the Guam Department of Agriculture are seeking volunteers once again to help with the removal of invasive algae that have been spreading rapidly in Tumon Bay.

Chaetomorpha (pronounced key-toe-morph-ah) is a type of macroalgae that is also known as “spaghetti algae” or “green hair algae.” The algal bloom was first noticed along the Tumon shoreline in June and grew rapidly when Tropical Depression 10W passed the island, spreading the algae within 100 feet of the reef. In response to its accelerated growth, a cleanup occurred on July 15th between Ypao Beach and Matapang Beach. A team consisting of Dept. of Agriculture, GVB and nearly 60 volunteers collected an estimated 500 pounds of algae and it was taken to an inland site identified by Dept. of Agriculture.

Monitoring of Tumon Bay in the last month prompted the need to schedule another cleanup to further bring the algae under control. The next cleanup is now set for Saturday, August 25, 2018 from 9 a.m. to 1 p.m. from Ypao Beach to Matapang Beach.

“We thank all the volunteers for helping us last month and we again invite the entire community for our second cleanup effort to remove the invasive algae,” said GVB President and CEO Nathan Denight. “This is a safety concern as the Chaetomorpha algae can negatively affect our coral, marine life and beachgoers.”

The cleanup will continue to focus on the worst spots of the algal bloom between Ypao Beach to Matapang Beach.

“We were planning to shift cleanup efforts to Cocos Island in Merizo, where the algal bloom was first discovered several years ago. However, due to the urgency of the situation in Tumon Bay, we needed to address this problem first,” said Fisheries Biologist Brent Tibbatts. “We hope to see everyone on August 25th!”

Tibbatts added the cleanup at Cocos Island is being scheduled a few weeks after the one in Tumon. Dept. of Agriculture and GVB are working with the National Oceanic and Atmospheric Administration (NOAA) to finalize logistics.

In the meantime, there will be two meeting sites for the August 25th cleanup – one at the Ypao Beach Main Pavilion at Governor Joseph F. Flores Memorial Park and the other at Matapang Beach. Volunteers are encouraged to wear comfortable clothing and bring snorkel gear and small hand nets to scoop up the algae. Water will also be provided for the volunteers, as well as containers and small nets to collect the algae.