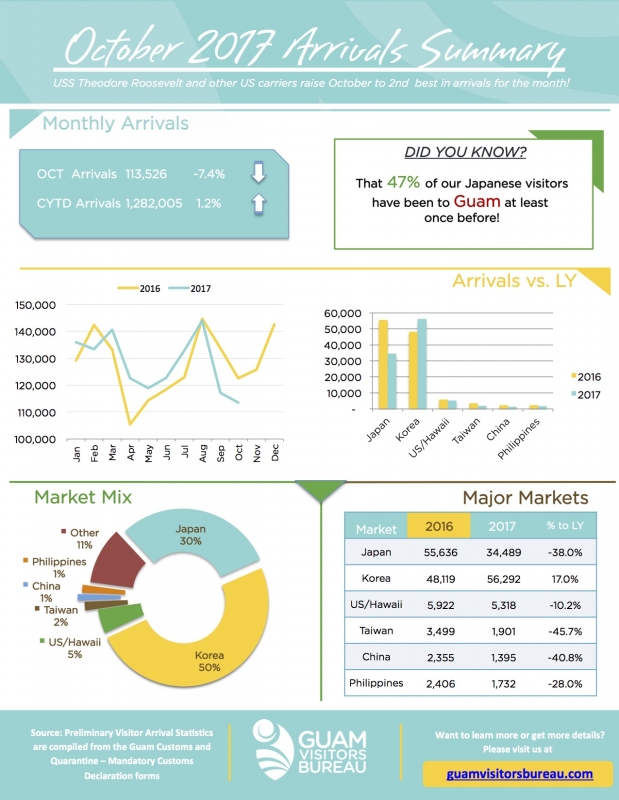 “It’s amazing what we can achieve when we continue to work hard and focus on helping to grow the visitor industry. This administration is committed to working alongside the Guam Visitors Bureau and its partners for our island, our economy and our people.”

Guam welcomed 113,526 visitors during the first month of Fiscal Year 2018. Events such as the Guam Ko’ko’ Half Marathon helped to attract more visitors and allow us to record the second best visitor arrivals for October in the island’s tourism history.

“A lot of hard work is put into promoting our island, and attracting visitors to participate in our events and activities, as well as learn more about our Chamorro culture and people. In the spirit of Thanksgiving, I just want to let our 21,000 tourism workers know how thankful Governor Calvo and I are for their service to Guam’s top industry. Let's stay focused and let's continue working together,” said Lt. Governor Ray Tenorio.

South Korean visitor arrivals increased by 17% over the previous year. Guam now has six airline carriers providing service from Korea, with Air Seoul’s direct flights from Incheon being the most recent airline to launch this past September. Guam will also be represented at the upcoming Hana Tour International Busan Show in early December to further encourage travel from the Korea market.

“Our team has been working hard on recovery efforts in our source markets. The next few months will definitely be very busy as we speak to existing and potential airline partners, encourage in-country diversification and promote our events and campaigns to draw more visitors,” said GVB President and CEO Nathan Denight

Majority of the cancellations came from Japanese school groups that had planned to travel to Guam between September and December. However, Guam already welcomed several school groups that brought hundreds of students to the island as a sign of their commitment to peace and cultural exchange in the region.

GVB and its tourism partners are preparing for Guam’s largest mega familiarization tour with nearly 400 Japanese media and travel agents anticipated to arrive on island by the end of November and stay through the first few days of December. The goal for the MegaFam Tour is for these visitors to experience Guam’s family friendly and peaceful environment, all while attending an expo of events and activities, and touring the island.

The MegaFam Tour is rolled into the promotion of deals tied to the 50th anniversary of the first flight from Tokyo to Guam in 1967.

The governor recently traveled to Taiwan for a trade mission accompanied by GVB, GEDA and GIAA. He spoke to different airlines to add additional flights to Guam, as well as met with Taiwanese investors that are looking to develop their properties on island. He reassured them that Guam is working to solve the H2B problem.