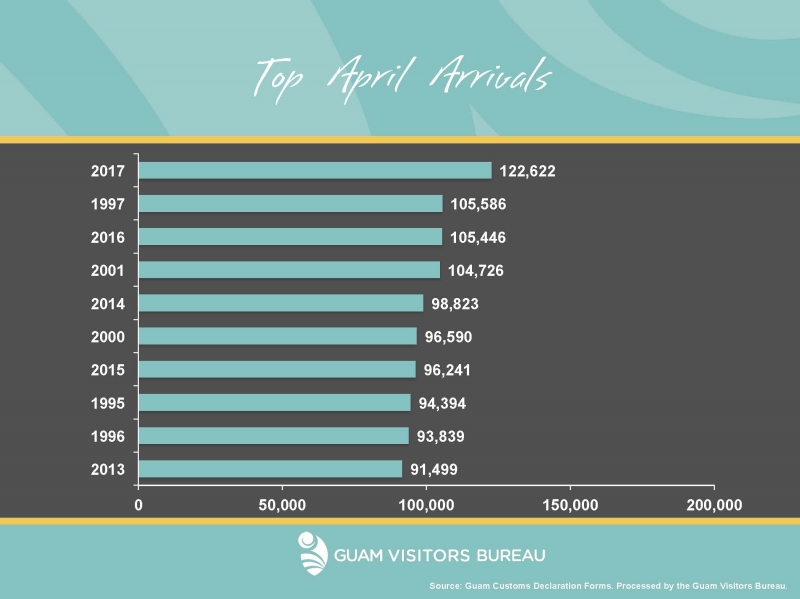 “More visitors have discovered our beautiful and pristine island. We have more milestones to celebrate as April arrival numbers have jumped to historic levels. I want to congratulate the hard working men and women of the Guam Visitors Bureau and the airline and tourism industries on job well done. We know it’s not easy to put together events, activities and projects that show how tourism works for Guam. We look forward in continuing to break records when it comes to visitor arrivals."

“It’s clear Guam is attracting more visitors to our shores and people want to get a taste of our Håfa Adai spirit and Chamorro culture,” said Lt. Governor Ray Tenorio. “Guam’s number one industry supports over 20,000 jobs in our community. I encourage everyone to thank our hospitality workers as we celebrate Tourism Month in May.”

Markets firing on all cylinders

Growth and diversification of Guam’s visitor markets are firing on all cylinders to make April visitor arrivals the most robust its been in the island’s history. With gains in Guam’s two top markets of Japan (+1.1%) and Korea (+38.4%), followed by other major visitor markets, GVB’s efforts are seeing results.

“Traditionally, April has been one of the slowest months of the year. If we received 100,000 tourists, that would mean it was a good month. Welcoming over 120,000 visitors is a great example of the record growth Guam is experiencing,” said GVB President and CEO Nathan Denight.“We also had many events in April which helped contribute greatly to bringing in more visitors.”

GVB strategically plans its signature events to draw visitors during the slow months of the year. In April, the United Guam Marathon and Smokin’ Wheels Weekend helped arrivals soar, including a Meeting Incentives Conventions and Exhibitions (MICE) event with Prudential Life Insurance Korea that brought in about 1,300 visitors.