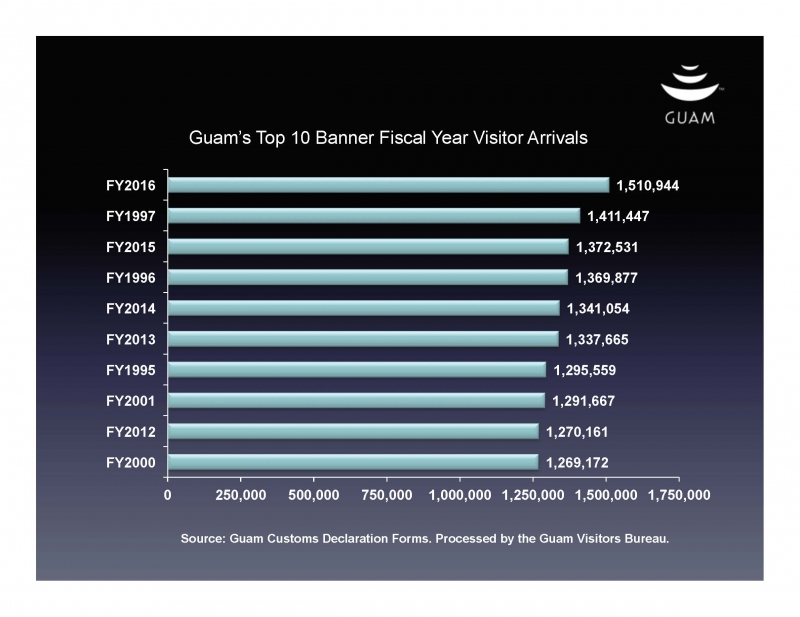 “Tourists come to Guam for many reasons – white sandy beaches, diving, blue skies, warm smiles, great culture. Guam is an amazing destination! Hosting 1.51 million visitors means we have found success in working collaboratively with our public and private partners in tourism. I congratulate the Guam Visitors Bureau and the men and women in our number one industry on a job well done.”

The budding visitor markets of Korea and the Republic of China also enjoyed the best fiscal year in visitor arrivals. Korea was up 35.2% over FY2015 recording 519,430 visitors, while the Republic of China demonstrated an 11.4% growth over FY2015 with 26,271 visitors. The Philippines also had the best fiscal year in arrivals with 18,704 visitors coming to Guam, a 52.3% increase when compared to FY2015.

“It’s no surprise that tourism arrivals continue to grow. People fall in love with our island over and over again because of the warm hospitality of our people and the uniqueness of our Chamorro culture,” said Lt. Governor Ray Tenorio. “That’s why tourism works for our community because it provides jobs and opportunities that attract visitors to Guam, while placing our people first.”

“Achieving the best fiscal year of all time can be attributed to many different events that drew visitors to Guam and the success of the Visit Guam 2016 campaign,” said GVB President and CEO Nathan Denight.

“The Pacific Asia Travel Association (PATA) Annual Summit and Festival of Pacific Arts were two of the biggest events that gained worldwide attention and brought thousands to the island in 2016. We are so proud of the hard work and dedication from our board of directors, management and staff at the Bureau, but our work is not over yet.

“Our momentum continues with the “Year of Love” theme for Visit Guam 2017 into next year as we seek to accomplish the goals laid out in the Tourism 2020 strategic plan. Si Yu’os Ma’ase to Governor Calvo, Lt. Governor Tenorio, Senator Barnes, the Guam Legislature and all of our tourism partners for their support of this industry and doing their part in making Guam the best place to live, work and visit,” Denight noted.

Additionally, Valiant Shield contributed to the record number of arrivals for the month of September, with over 6,000 military personnel that came ashore for the duration of this military exercise.