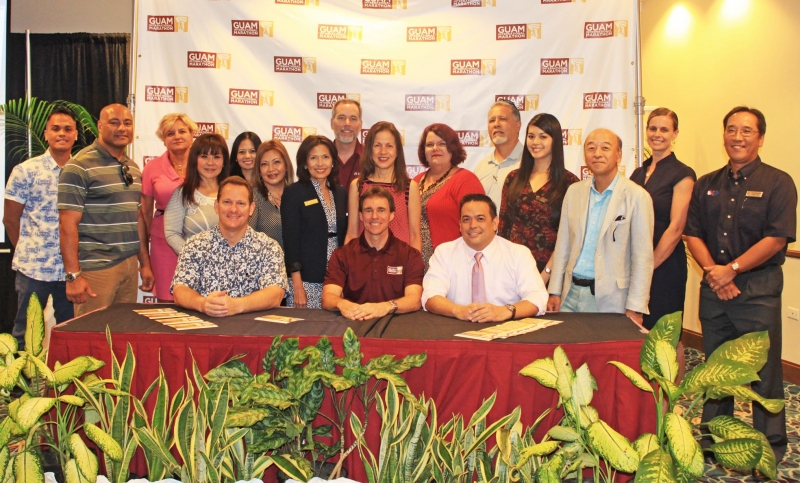 (Tumon, Guam) The Guam Visitors Bureau, along with Pacific Islands Club Guam and United Airlines announced the opening of registration and some exciting changes in store for the 2015 Guam International Marathon. The third annual Guam International Marathon will take place on Sunday, April 12, 2015. Event organizers announced changes to the race finish, as well as the designation of 2000 Sydney Games Olympic gold medalist, Naoko Takahashi as event Ambassador.

Other notable changes for the 2015 Guam International Marathon include a revamped post-race Finisher’s Festival and event expo. In an effort to improve the finish line atmosphere and to capitalize on the beauty of Ypao Beach, marathon organizers announced that the Finish Line for the race will be moved to the north parking lot area of Ypao Beach. Concurrent with this change, the post-race finisher’s festival will immediately follow the races and will take place in the portion of Governor Joseph A. Flores Memorial Park closest to the beach. According to Guam Sports Events Managing Director Ben Ferguson, the decision to move the finish line and post-race festivities closer to the beach was a natural one. “Given the beauty of Ypao Beach, it made perfect sense to make this change and in doing so have our off island runners experience one of Guam’s natural treasures.” The larger post-race Finisher’s Festival will begin at 6:30am and will feature numerous food and beverage concessions, as well as an exciting entertainment line-up.

The 2nd Annual Guam International Marathon saw 2,910 runners from around the world participate, which represented a 30% increase from the inaugural event in 2012. “We expect even more runners both locally and internationally to participate in this much anticipated event,” said Ferguson. “In its third year, the Guam International Marathon continues to build momentum and gain regional recognition and notoriety. We are extremely excited to announce the designation of Naoko Takahashi as our event Ambassador. Ms. Takahashi is a world renowned runner and maintains super-celebrity status in Japan.”

Naoko Takahashi is a Japanese long-distance runner competing mainly in the marathon. She is widely celebrated for her Olympic record setting performance in her women’s marathon victory at the 2000 Olympic Games in Sydney. Ms. Takahashi was also the first woman to break the 2 hour and 20 minute barrier in the marathon, doing so at the 2001 Berlin Marathon.

This Guam International Marathon event includes 5K, 10K, Half Marathon (13.1 miles) and Marathon (26.2 miles) race distances. All courses have been officially certified by the IAAF (International Association of Athletic Federations) and AIMS (Association of International Marathons and Distance Races). This designation means that marathon runners may use this as a qualifying event for the Boston Marathon. Complete event details and registration can be found on the official event website at www.guaminternationalmarathon.com. Early bird registration fees are available to on line registrants up until August 31.