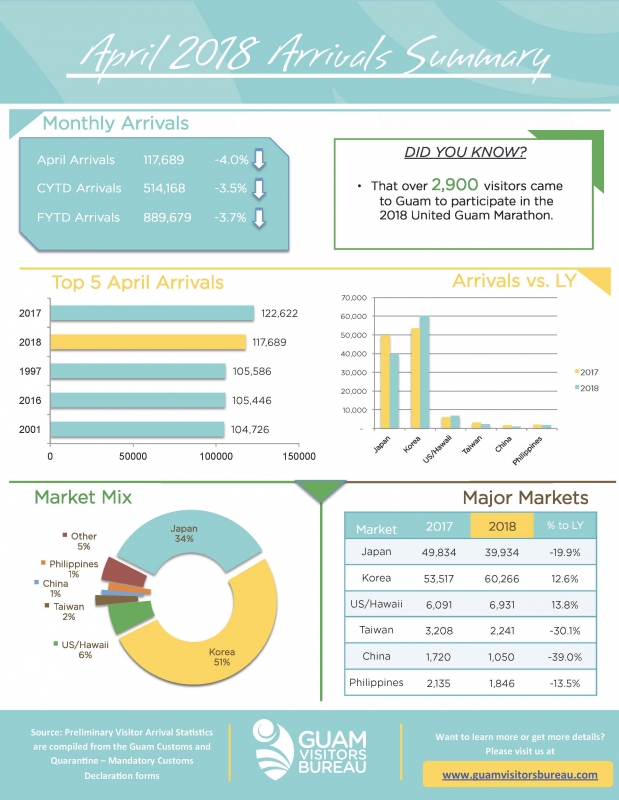 “We’re proud of the efforts that go into making our tourism industry thrive and we thank the folks at the Guam Visitors Bureau for working hard day in and day out with their industry partners to show how tourism works for Guam. We stand committed to supporting the over 21,000 men and women that are part of Guam’s top industry."

Guam continues to make records in visitor arrivals. April 2018 finished second best with 117,689 visitors being welcomed to the island:

“It’s important to note that April is traditionally known as one of the slowest months of the year. If Guam received 100,000 visitors in years past, it meant it was a good month. We welcomed over 117,000 visitors this year, thanks to growth and diversification of our markets, and events that occurred throughout this month,” said GVB President and CEO Nathan Denight.

GVB strategically plans events in the slower months of the year to attract more visitors. Events like the United Guam Marathon, Smokin’ Wheels Weekend, Marianas Open and the AKB48 Fan Tour helped the overall visitor arrivals in April, which is considered the start of the visitor industry’s off-season.

Meanwhile, Korea arrivals grew by 12.6% when compared to the same period last year. Other markets that additionally demonstrated growth and diversification in the month of April include The Russia Federation by 35.8%, Europe by 32.9%, Palau by 27.7% and U.S. and Hawaii by 13.8%.

“A lot of work goes into promoting Guam and all of its events, activities, and services to the world. Let’s encourage each other to keep sharing our unique Chamorro culture, our traditions and the island’s natural beauty with everyone. We’re all ambassadors of this island paradise,” said Lt. Governor Ray Tenorio. “I also want to personally thank our hospitality workers as we celebrate Tourism Month in May. Biba Guam!”

GVB has pushed forward with air service initiatives to help with the recovery of Guam’s air seat capacity. Specifically for the Japan market, the main reason for the decline of seats is primarily due to Delta pulling out of Guam, Saipan and Palau, and United’s reduction of flights to Guam. However, while there are fewer seats, demand is still there to travel to Guam.

What GVB has learned is that load factors for Guam’s top markets of Japan and Korea have shown improvement for April compared to last year. For Japan, the load factor for the month of April 2018 was around 75% compared to 2017, which was about 70%. Korea’s load factor remains strong as April 2018 recorded around 88% compared to the previous year’s 89%.

For the next three months, GVB forecasts that load factors in Japan will perform 15% better than last year, which is an 81% average load factor between May and July. In 2017, the load factor averaged 66%. What this means is there is still a demand from the Japanese market to visit Guam, as more seats are being filled in the current seating inventory for 2018.

Furthermore, Japanese travel agents have announced their summer charter schedule between July to September 2018, which will provide 33,277 more seats to Guam, about double from last year’s numbers. More than 350 charters are scheduled to operate through the rest of the year.

GVB and the Guam International Airport Authority (GIAA) continue to work closely to offer its regular air service support program and the airport’s incentive plan for discounted fees. That partnership led to Japan Airlines completing its first full month with second daily flights from Narita to Guam. This will bring an additional 40,000 seats to the island through the end of October. United will also add 20 more flights between Tokyo and Nagoya and Guam that will run in August. GVB is additionally in communication with other existing carriers to increase service and other full service carriers and Low Cost Carriers (LCCs) to consider opening up new routes to Guam.

Denight added, “A tremendous amount of effort has been made to bring in more charters flights to help with the loss of seats in the Japan market and further Guam’s presence. We’re also doing our best to keep our other markets growing and looking into newer markets, like LGBTQ, to attract more visitors on a global scale. Our work is far from over, but we’re making progress.”