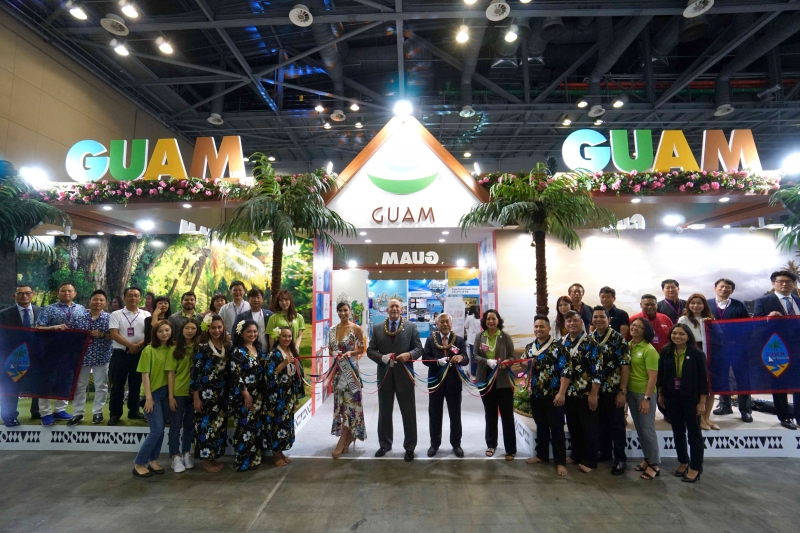 Following the Hana Tour International Show, GVB Board Chairman Morinaga led the Guam delegation and Pacific Star Resort & Spa representatives to KOTFA and participated in the opening ceremony on June 14th. Guam received the “Best Booth Design” award out of 60 countries that exhibited at the show at the end of the four-day event.

“I am proud that our delegation was able to take home the best booth award for our island home.  They all did such a great job in showcasing Guam’s Håfa Adai spirit and Chamorro culture,” said GVB Board Chairman Morinaga. “KOTFA is one of Korea’s first travel shows and Guam has continued to have a long-standing relationship spanning over 32 years.”

At both travel shows, Team Guam offered a variety of attractions including performances by local music legends Jesse Bais and Ruby Santos, Guam cultural dancers, photo opportunities with Miss Guam Universe 2017 Myana Welch, and an interactive photo booth. Visitors were also able to immerse themselves with a 360-degree virtual reality experience of Guam. Live posts on GVB’s social media were also shared throughout the duration of the travel shows.

Moreover, GVB promoted its Visit Guam 2018 campaign, “#InstaGuam.” The campaign focuses on Guam as an instant vacation for different countries in Asia while encouraging the use of Social Networking Sites (SNS) to promote the island.

In addition to the travel shows, GVB met with Korean Air and Jeju Air to provide an update on Guam’s promotions and travel trends, and build upon its commitment to growing the Korean market. GVB also participated in the CAPA LCC in North Asia Conference from June 11 – 12, 2018 to receive updates on Low Cost Carrier (LCC) trends and network with various airlines within the Asian region.

“It’s important for GVB to have face time with our airline partners to support not only our Korea market but our other source markets,” said GVB President and CEO Nathan Denight. “Every opportunity we can get to learn about trends in our region and network with airlines is critical to the growth and development of existing and future air service to Guam.”

As a result of GVB and Guam International Airport Authority's air service initiatives, Jeju Air recently announced it would open a new non-stop route between the Kansai International Airport (KIX) in Japan and the A.B. Won International Airport in Guam that will run six times weekly starting July 21st. The airline will also launch a connecting flight from Chungju, Korea into KIX and Guam, opening up a new city segment in the Korea market.