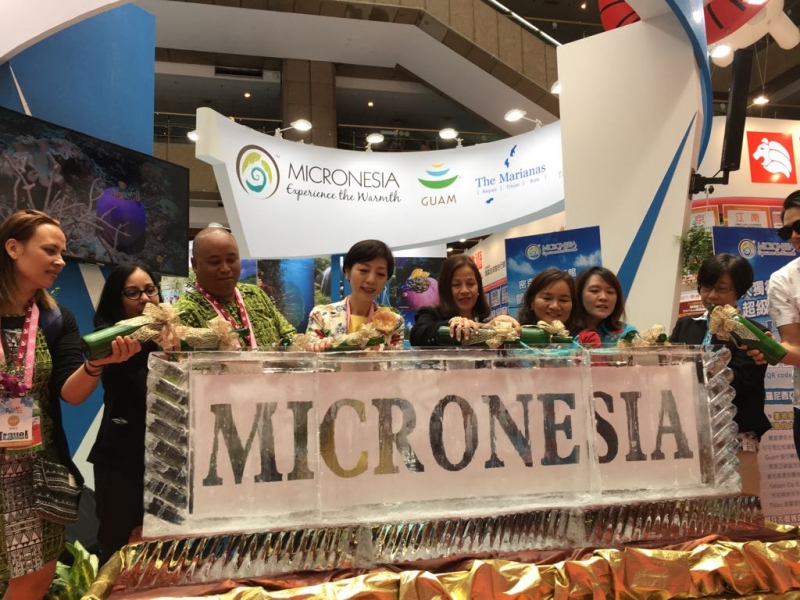 GVB teams up with Micronesia partners, travel agents and airlines

(Taipei, Taiwan) The Guam Visitors Bureau (GVB) has increased its efforts to improve its Taiwan market through participation at the Taipei Tourism Expo (TTE). Considered Taiwan’s largest travel fair during the first half of the year, TTE was held at the Taipei World Trade Center from May 4-7, 2018. A total of 295,189 attendees were recorded with more than 350 exhibitors present.

“What’s significant about Guam being present at this large tourism expo is the exposure value and networking that takes place amongst thousands of people in this key source market,” said GVB President and CEO Nathan Denight. “While we compete with other destinations to bring visitors to our island paradise, we highlight the fact that Taiwan has a special relationship with our local people, with our roots tracing back to this country from the Austronesian migration.”

“We opened up the pavilion by pouring blue liquid into an ice carving that emphasized the word, ‘Micronesia.’ This represented how the blue ocean that surrounds our region unites us,” said GCMC Vice Chairwoman Joann Camacho. “This collaboration between the CNMI and Palau has increased our efforts to truly showcase each of our destination’s unique features at the same time.”

GVB was hard at work with three major travel agents to aggressively promote and sell Guam, with a total of 43 packages being sold at the Guam booth. The total value of the Guam packages was worth about $43,000. A variety of in-depth meetings were held with other travel agencies to better understand their frontline needs in the market. The Bureau additionally partnered with Avis Rent-a-Car to provide an exclusive discount on car rentals on Guam throughout 2018 for visitors that show proof of their boarding passes.

“We welcomed over 36,000 Taiwanese visitors in the last fiscal year and we are looking to welcome even more through growing and diversifying in-market with the help of our industry partners,” said GVB Vice President Antonio Muña, Jr.