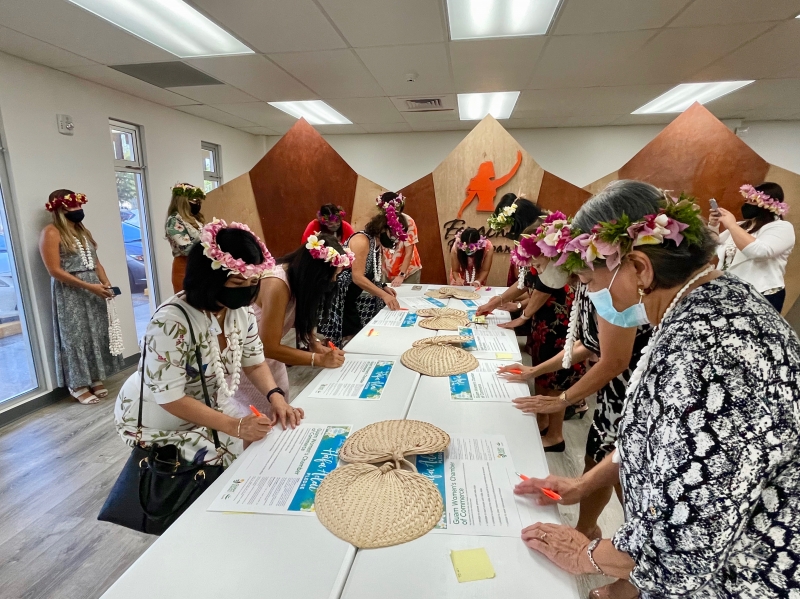 (Hagåtña, Guam) The Guam Visitors Bureau (GVB) celebrated the return of the Håfa Adai Pledge program with the Guam Women’s Chamber of Commerce (GWCC) taking the pledge on Friday, March 26, 2021 at the Guam Women's Business Center in Hagåtña.

“We thank GVB for this opportunity to be extended to our chamber, our members and our community to help keep the Hafa Adai spirit alive. This pledge signing falls in line with what the GWCC stands for, which is empowering women and with that empowerment comes the perpetuation of our culture and heritage and keeping it alive,”said Rene Logie, GWCC Executive Director.

“We are excited to become a part of the Håfa Adai Pledge familia and commit to promoting our culture, especially with our upcoming Fanachu Famalao’an, the GWCC’s signature event which has been a consistent, impactful milestone for women in business,” said GWCC President Laura Nelson Cepeda. “Working together with GVB, we continue to advocate for equality and support for women from all backgrounds. Our CHamoru culture is rooted as a matrilineal society and the Håfa Adai Pledge program is an extension of honoring the women that have shaped our 4,000-year-old history. I want to thank our founders for also sharing this day with us.”

In addition to serving as President of GWCC, Nelson Cepeda serves as the chairwoman for the Cultural Heritage, Community Outreach, and Branding Committee at GVB.

GWCC invited its founding members to participate in the signing ceremony and capped off Mes CHamoru with light refreshments for its board members in attendance.

About the Guam Women’s Chamber of Commerce

The Guam Women’s Chamber of Commerce’s mission is to advance women in business through advocacy, networking, mentorship and access to resources. Their vision is for Guam to be an island community whose economy is driven and influenced by the equal participation of women in business.

Leading up to 2013, the need for a strong business women’s advocacy group had been evident. The call for women’s voices and action in job creation, competitive wages and benefits, health care, education, workplace equality, crime prevention, and so much more had grown increasingly louder. In response to these needs, a group of women advocates came together to form the Guam Women’s Chamber of Commerce on September 3, 2013.

About the Håfa Adai Pledge

The Håfa Adai Pledge is the cornerstone of the Guam Visitors Bureau’s local community branding program. The Håfa Adai Pledge program has grown steadily in the number of participants as well as the content of individual pledges since its inception in 2009. More than 940 private businesses, government agencies, nonprofits, organizations, and local school children have taken the pledge, representing more than 44,000 individuals locally and abroad.