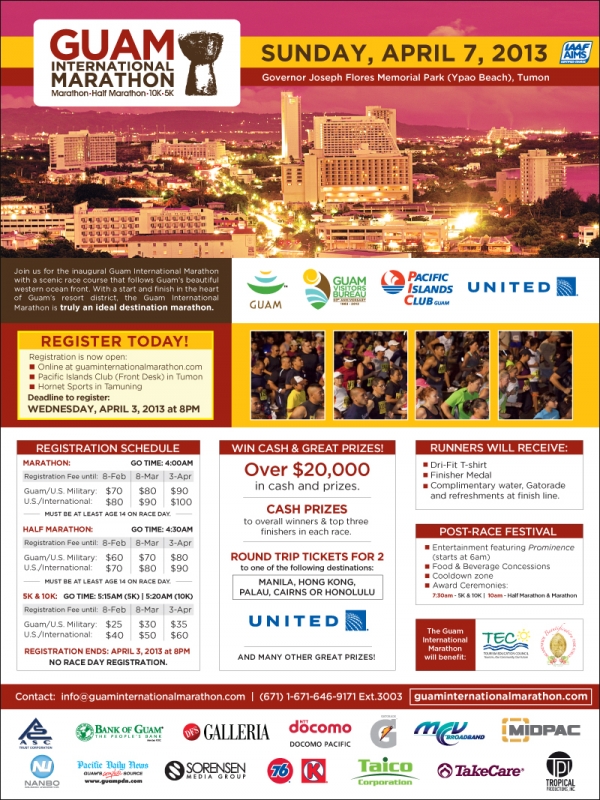 (Tumon, Guam) – The Guam Visitors Bureau, along with the Pacific Islands Club Guam and United Airlines will host the inaugural Guam International Marathon set to take place on Sunday, April 7, 2013. The Guam International Marathon is Guam’s signature marathon event that will be promoted by Guam’s overseas marketing offices in Japan, Korea and Taiwan and will showcase the island as a sports tourism destination.

The event will include a Full Marathon (26.2 miles), Half Marathon (13.1 miles) 10K, and 5K. All courses have been officially certified by the IAAF (International Association of Athletic Federations) and AIMS (Association of International Marathons and Distance Races) which means that marathon participants may use this as a qualifying event for the Boston Marathon or other events with qualifying standards. Complete event details can be found on the official event website at www.guaminternationalmarathon.com.

The Guam International Marathon is truly an ideal destination marathon. All four race distances are run on a common out and back race course.  The marathon and half marathon follow Guam’s beautiful western ocean front on Marine Corps Drive, with the marathon continuing to a turnaround in Sumay in front of the T. Stell Newman Visitor Center.

“This event is primed to put Guam on the international marathon map which is clearly beneficial to the host tourism industry and economy as is the case around the world,” says Karl Pangelinan, General Manager for the Guam Visitors Bureau. “Runners that travel to take part in events such as these contribute to the local economy through spending, often bringing their families with them and are apt to return for R&R vacations after the event.”

Registration is currently underway. Runners can register online, at the Pacific Islands Club in Tumon or at Hornet Sports in Tamuning. Registration will close on Wednesday, April 3, 2013. However there are several early bird registration discounts that are available. Race packet pick up will take place on Saturday, April 6, 2013 from 11am to 5pm at the Guam Visitors Bureau lower parking lot.

"This event will provide our international and local runners with a world-class marathon event," says Ben Ferguson, Executive Director of Pacific Islands Club and Race Director of the Guam International Marathon. "We are excited to launch what we hope will become Guam’s signature sports tourism event and in doing so, create an opportunity for runners of all nationalities to experience the beauty of Guam and our people."

All the races will start and finish in front of the Guam Visitors Bureau in Tumon, with pre and post-race activities taking place in Governor Joseph Flores Memorial Park, Ypao Beach.

“I am excited and grateful that Guam will host a premiere international running event for running enthusiasts from around the globe. But more importantly, for providing our local community and runners of all ages and abilities a chance to participate in one of 4 running distances,” says Marie Benito, former Guam Olympian who recently placed 2nd female in the Maui Oceanfront Marathon with a time of 3:27:23. “I look forward to participating in one of the races of the inaugural Guam International Marathon.”

Dr. Fred Schumann has been hired as the Race Advisor for the Guam International Marathon, bringing over 40 years of long distance running experience to the table. He ran cross-country, indoor track, and outdoor track for the nationally ranked Western State College of Colorado. In 1983, he ran the length of Japan from Kagoshima to Wakkanai over a 59-day period, which resulted in him receiving the Kanaguri Award from the Japan Health Marathon Federation. Fred has represented Guam in the marathon at the Micronesian Games, South Pacific Games, World Cup Marathon, World Track & Field Championships, and Seoul Olympic Games and has completed over 30 marathons and numerous ultra-marathon events. Along with being an integral part of the race organizing committee, Dr. Schumann will provide coaching advice on the event website.

“Based on the economic impact that the Honolulu Marathon has in Hawaii, we can expect the Guam International Marathon to result ina gain of direct visitor expendituresfor Guam in excess of USD 2.8million. And that is not including indirect and induced spending as well as direct, indirect and induced tax revenue,” says Dr. Fred Schuman, Associate Professor, Global Resources Management, University of Guam and Race Advisor to the Guam International Marathon. “As the number of runners that come to Guam to race increase in the future, this number will increase accordingly.”

Race updates and information can also be found on the official event Facebook page at www.facebook.com/guaminternationalmarathon. Next early bird discount deadline is Friday, February 8.