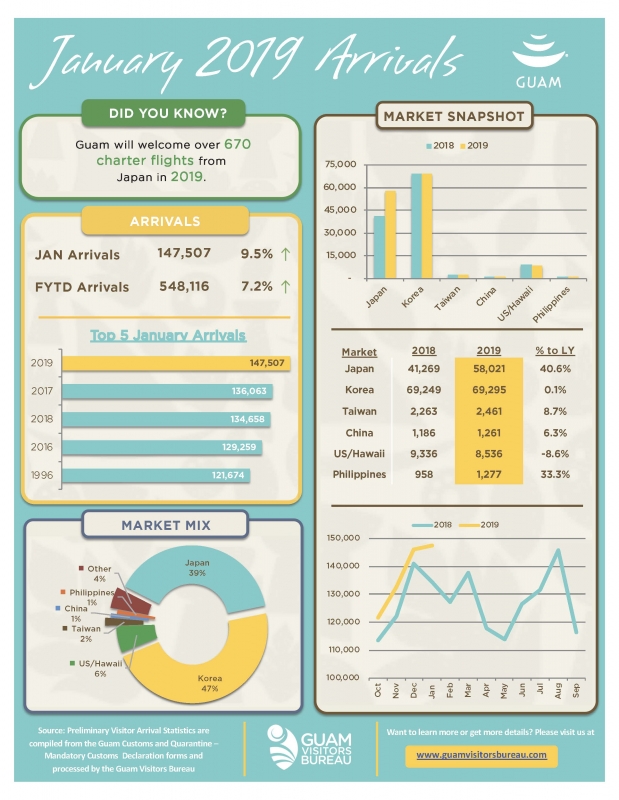 (Tumon, Guam) The Guam Visitors Bureau (GVB) has announced that arrivals for January 2019 have reached a new milestone, breaking the record for the most visitors welcomed to Guam in a single month that was just set in December 2018.

The GVB Research Department has verified that 147,507 visitors traveled to Guam, a 9.5% increase when compared to the previous year. January 2019 is now the top month in Guam’s tourism history.

The first half of FY19 is anticipated to have more visitors due to airlines increasing seat capacity to meet growing demand. The GVB Research Department notes that seat capacity for January 2019 has increased by 11.4% or 20,889 more seats than January 2018.

Guam welcomed 58,021 Japanese visitors in the month of January, showing a 40.6% boost in the Japan market over last year.

Part of the success with the Japan market recovery is GVB and the Guam International Airport Authority (GIAA)’s airline incentive program. United will continue to offer 11 weekly flights between Nagoya and Guam during the winter period due to strong travel demand. The airline also announced it will add nine extra flights on its Boeing 737 aircraft between Narita and Guam that will start March 31, 2019. Additionally, T'way also began its Nagoya-Guam service on December 29 and will continue through October 2019.

Airlines have committed to 47 charter flights to Guam for Golden Week, which will run between April 28-May 6, 2019. Guam had seven charters last year for Golden Week.

Through the airline incentive program, Japan Airlines (JAL) committed for one year to twice daily flights between Narita and Guam with its 767-300ER aircraft that began in March 2018. However, it will begin operating a bigger 777-300 aircraft with 113 additional seats to accommodate travel demand to Guam.

“We thank all our airline and travel agent partners for their continued commitment to Guam. We anticipate record-breaking arrivals through this winter season,” said GVB President and CEO Nathan Denight.

Korea arrivals experienced a slight increase (+0.1%) finishing with 69,295 visitors in January 2019. “GVB will continue to closely monitor the Korean market, which has seen significant growth over the last several years,” said GVB Acting Director of Tourism Research Nico Fujikawa. “As Korean arrivals begin to level-off, it is crucial to maintain a healthy sustainable growth going forward, as well as look to new potential markets to further develop.”

The GVB Research Department has also released its Quarterly Visitor Profile report within the January 2019 preliminary arrivals report, noting spending increases with the Japan and Korea markets in the first quarter of Fiscal Year 2019.

The January 2019 preliminary arrivals report, Quarterly Visitor Profile report, as well as other statistics and resources, can be found on the GVB corporate website at www.guamvisitorsbureau.com.