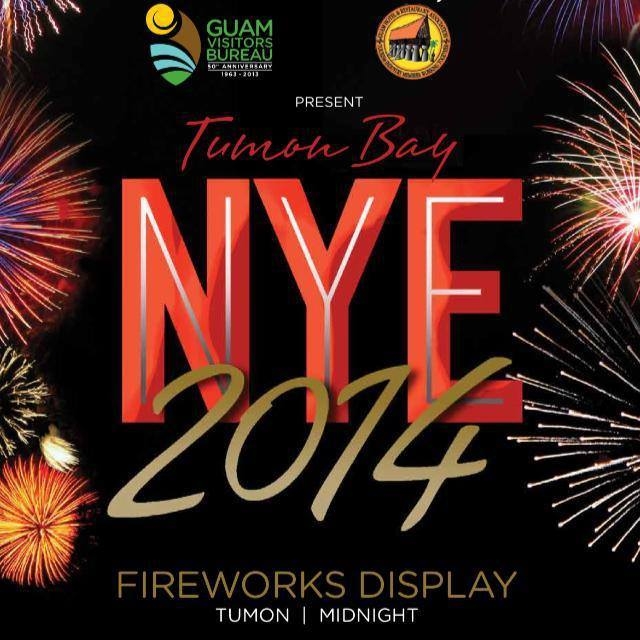 (Tumon Guam) The Guam Visitors Bureau (GVB), together with the Guam Hotel & Restaurant Association (GHRA) and its industry partners, will be hosting the New Year’s Eve Fireworks display over Tumon Bay to ring in 2014. The annual show will be done by ShowPros Pyro from three barges off the center of Tumon Bay at the stroke of midnight. The barges will be launched from the main pavilion at Governor Flores Memorial Beach Park, also known as Ypao Beach Park. The fireworks display will last approximately 15 minutes.

“2013 was an incredible year for GVB and our industry, as we celebrated 50 years of tourism on Guam,” said GVB General Manager Karl Pangelinan. “With three barges being used, we believe this will be the most impressive fireworks show ever seen on our island. We’re proud to join GHRA and our generous sponsors to mark the beginning of another banner year for our residents and visitors and celebrate where America’s New Year begins. ”

GHRA & GVB also want to remind the community to be safe, keep Tumon clean and celebrate responsibly during the New Year’s Eve festivities.

“Although the beach park will be open, Department of Parks and Recreation won't be renting out pavilions," said GHRA President Mary Rhodes. "This is the first year we will be using barges to launch the fireworks from, instead of the beach park. However, we need to make sure access to the beach and main pavilion are secured. That's why we are working with G4S Security and DPR to control access with the fireworks company."

In addition, GVB invites the local community to participate in its New Year’s Eve social media promotion by visiting its facebook page for event details. Participants who “like” the GVB facebook page, change their facebook profile picture to GVB’s New Year’s Eve Guam photo and hash tag #NYEGU will be eligible to win a Guam brand prize package, along with a pair of tickets to see PEPPER Live in concert on New Year’s Eve. Winners will be contacted via facebook and announced over the radio on the stations of i94, Isla63, Power98, K57 and 105theKat.

GVB & GHRA would like to thank ShowPros Pyro, Perez Brothers, Office of the Governor & Lt. Governor, Guam Fire Department, Guam Police Department and Guam Department of Agriculture, Division of Aquatic and Wildlife Resources for their help. The New Year's Eve Fireworks display would also not have been made possible without the contributions of DFS Guam, Outrigger Guam Resort, Hilton Guam Resort, Pacific Islands Club, Fiesta Guam Resort and the Hyatt Regency Guam.